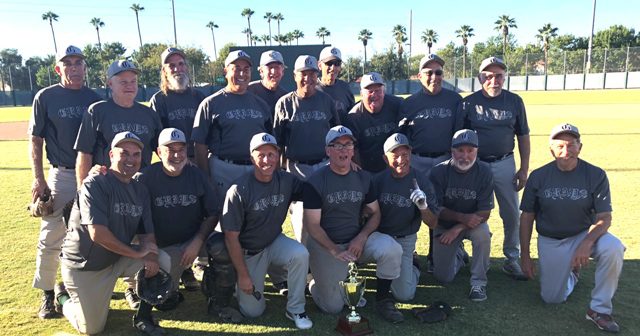 ‘Ociepka Takes Control on the Bump’

October 26, 2018, Mesa, AZ…In a tough spot, Chicago Grays pitcher Paul Ociepka knew what he needed to do to secure a victory – and a championship – for his team. With Chicago leading by one run, the San Diego Aztecs had the bases loaded with two outs in the bottom of the ninth inning. Jeffery Aguirre came to the plate to face Ociepka, looking to complete a comeback victory for San Diego.

Ociepka wasn’t going to let that happen. “I’ve just got to man up, and that’s what I did,” Ociepka said. Ociepka got Aguirre to ground into a fielder’s choice to third base, securing a 7-6 win and the 65+ Cactus Division championship.

After the ball left Aguirre’s bat, it wasn’t a simple play for the Grays. Chicago third baseman John Malisia knocked down the ball, before regrouping, gathering the ball and beating the runner to the bag at third for the force out. “I can’t let it get by me,” Malisia said. “I’ve been playing on one leg for the last couple games, so I just wanted to make sure that I kept it in front of me. As long as I did that, hopefully you get to the base before the guy did.”

Malisia’s play sealed a complete-game victory for Ociepka, who found his rhythm on the mound during the middle innings. While Chicago took a 6-4 lead after three innings, Ociepka didn’t allow a run in the fourth, fifth, sixth and seventh. That included a 1-2-3 sixth. “He was unbelievable,” Gray’s manager Steve Faigin said of Ociepka. He retired the first two San Diego batters in the ninth before the Aztecs started to rally. San Diego scored a run to cut Chicago’s lead to one run before Ociepka escaped the bases-loaded jam to end it.

Chicago swung the bats well early to build a lead for Ociepka. The Grays scored two runs in the first. Leadoff hitter Ken Seelie scored on a wild pitch after drawing a walk and stealing a pair of bases then Joe Kutis later added an RBI single. However, the Aztecs answered back in the bottom of the first scoring three runs, including an RBI groundout by Henry Rimoldi. Chicago took back its lead with a four-run second. Seelie hit a two-run double, Dan Doleshal drove in a run with a ground out and Dave Pickering knocked an RBI double.“We held it together,” Faigin said.

Pickering went 2-for-3 and reached base three times for Chicago. Seelie and Ricky Martin each scored a pair of runs. The Grays, who were the No. 7 seed in their division for the World Series, got off to a slow start in the tournament, losing two of their first four games. However, they ended the week with five consecutive victories, including beating the Aztecs in the championship game. In order to win the title, Chicago had to sweep

doubleheaders on its final two days, which they did.

“It was exciting, thrilling to the last pitch,” Faigin said. “It was unbelievable. These guys are the greatest bunch of guys I’ve ever played with.” For Ociepka, who said he won his first MSBL World Series championship in 1993, it was also memorable.