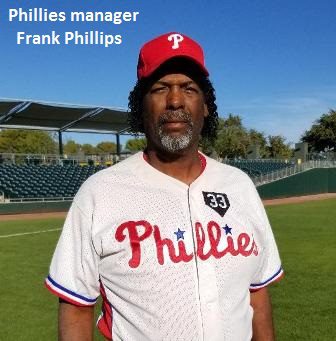 November 2, 2018, Hohokam Stadium, Mesa, AZ – As the Phillies walked out of the stadium the rookies were carrying the older guys’ bags but they were fine with that because it meant they had just earned their first World Series ring. The Phillies defeated the Dragons 11-6 to capture the 60 Central World Series title at Hohokam Stadium.

The Dragons didn’t make it easy on the Phillies, however, as they jumped out to a 5-0 lead in the first inning. Dragons shortstop Mark Adams – who had three stents placed in his heart after suffering a heart attack on the field three weeks earlier – led the charge driving in two and scoring a run in the first inning.

“He (Adams) missed the last two weeks and now he’s catching, batting and running just like he was before,” said 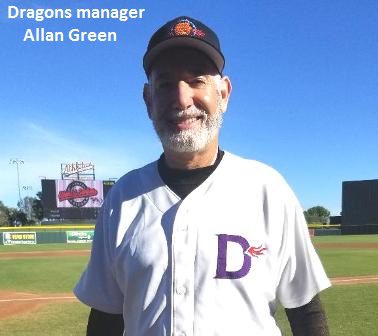 Dragons manager Allan Green. “We are thrilled he’s healthy enough to play with us. Modern medicine is unbelievable.”

After the first inning the Phillies southpaw and Team MVP Gregory Rodriguez settled down allowing just one more run over the next eight innings. The only other run came in the bottom of the fifth inning when John Hughes drove in Don Davenport with an RBI single for the Dragons. “After that start we had to just settle down and go to work,” said Phillies manager Frank Phillips. “Rodriguez kept his composure and stayed on his game and hit his spots left and right and kept them off the bases.” 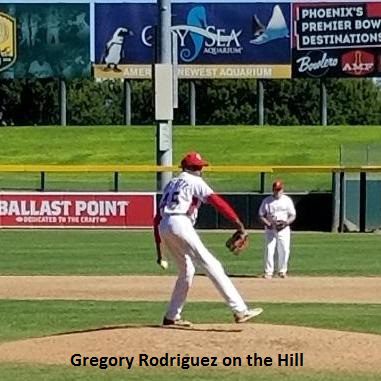 With Rodriguez settling in the Phillies began to chip away at the deficit with an RBI single from Wayne Weinberger in the second inning. In the fourth inning the Phillies scored on three consecutive RBI singles from Weinberger, Bill Brewer and Pete Cesario. “I’ve got a lot of confidence in these guys. They came back and we played a good game,” said Rodriguez. “The guys got some clutch hits and I beared down and made some good pitches and we won the game.”

In the top of the fifth inning the Phillies would grab their first lead when Bob Riley drove in two with a single. The Phillies offense never seem to let up all afternoon. Paul Drake added to his four hit day with a double in the seventh inning and Weinberger added some insurance when he drove in two more with a double of his own. 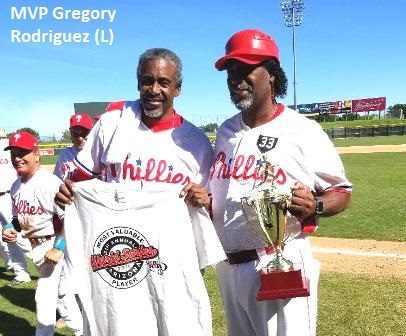 putting the ball in play,” said Phillips. “I have to really appreciate what they did for us.”

Even though the Dragons came away empty handed they relished the experience of playing in another World Series. “We are always happy to come here and get to the championship game and play as many games as we can,” said Green. “You can’t always win and they are a very good team. We’ll be back next year.”

During pool play the Phillies battled to a 4-2 record and were able to secure the second seed.

The Dragons also went 4-2 during pool play behind strong pitching and clutch hitting. Despite losing to the Phillies in pool play the Dragons were confident heading into the game because it’s difficult to beat the same team twice. Last year, the Dragons lost to the Arkansas Diamonds 14-0 and beat them in the semifinals so they were hoping that experience would carry them to a championship this season.

In the semifinals the Phillies knocked off the Lehigh Valley Moondogs 9-3 behind a strong pitching performance from Pete Cesario. With the score 1-0 in the fourth inning the Phillies broke the game open by scoring six runs. The Moondogs loaded the bases with nobody out twice during the game the Phillies were able to escape the jams unscathed.

Behind the bat of second baseman John Hughes, who went four for five with five RBI, the Dragons cruised to a 13-7 victory over the Volcanoes in the semifinals to secure a spot in the championship game.