By Tom Pomatto, special to MSBL

November 3, 2018, Mesa, AZ…The Colorado Stars avenged their only defeat in MSBL 60 Cactus Division pool play by beating the undefeated Chicago North Cubs 8-6 in a thriller at Riverview Fields to capture the 60 Cactus Division World Series Championship.  Tournament MVP Hal Friskey scattered nine hits and survived bases loaded rallies by the Cubs in both the eighth and ninth innings for the complete game victory. 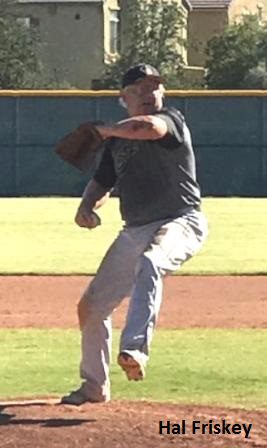 Colorado, which lost their only game to the Cubs in the opener of pool play, broke open the scoreless tie with four runs in the top of the third inning.  Steve Thompson’s double drove in the first run and Chuck Milo drove in the second run with his first of four hits on the day.  Blair Gifford added to the scoring in the third by doubling home two runs. Chicago answered in the bottom of the third with three runs of their own, with Bruce Grossman driving in the first run and leadoff man Marty Shandles delivering a 2-run single.

Colorado came back with two runs in the fourth, led again by Steve Thompson’s RBI single.  Will Mazia followed with a single, driving in a run to make it 6-3.  Chicago answered with single runs in the fifth and sixth to make it 6-5, the latter coming on a Colorado error after two outs, followed by a double off the bat of Chicago’s Bob Korvas. Colorado pushed across a run in the seventh to make the score 7-5, setting the stage for drama in the eighth and ninth innings.

Don Monsen led off the Chicago eighth with a single and then Friskey hit the next batter with a pitch.  After a sacrifice bunt by Mike Tiegs, moving the runners to second and third, Colorado elected to intentionally walk Tom Behringer to load the bases and set up a force play.  The strategy back-fired as Friskey then walked Mike Schmadabeck, forcing in a run to make it 7-6.  Friskey wriggled out of the jam by getting Mike Criscione to pop up to the mound and Korvas to ground out to short. 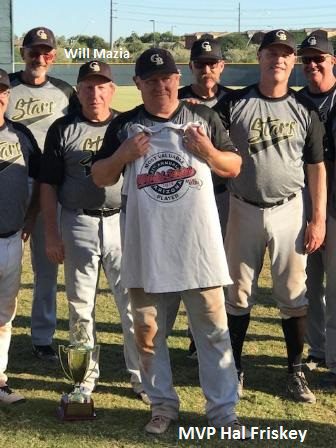 and second RBI to give Colorado an 8-6 cushion going into the bottom of the final frame.

In the Cubs ninth, Friskey got Cubs leadoff man John Whitehouse to ground out for the first out, but Kurt Bruksch singled to right field.  Friskey, running on fumes, then walked the next two Cubs hitters on eight pitches.  With bases loaded, Friskey dug deep one last time, getting Don Monsen to ground into a game ending double play.

Friskey, who pitched five shutout innings in the Semi-Final win over the MS Warriors, struck out three and walked five. Chuck Milo was 4-4 at the plate for the Stars, while Will Mazia and Steve Thompson both added 3 hits each.

Gary Kruse, who went the distance in the semi-final win, suffered the loss for the Cubs.  Bob Korvas and Dan Kraiss had two hits for the Cubs.