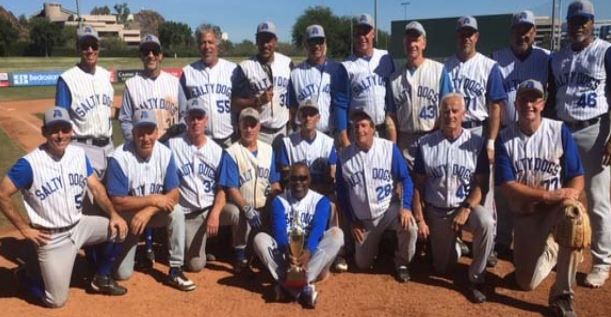 ‘Figuerua Gets it Done on the Mound at at the Plate’ 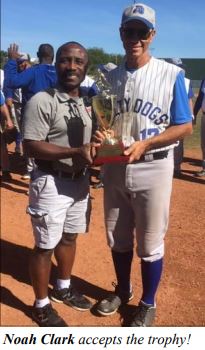 November 3, 2018, Diablo Stadium, Tempe, AZ- Rhode Island came from behind to score three times after there were two outs in the fifth inning. That was enough to lift them to an 8-6 win over California in the 60 + American Championship game. Trailing 5-3, a costly two-out error by the Tribe opened the door for the Salty Dogs. With a runner on first, Manny Colletti lifted a fly ball that the left fielder was unable to grab. Steve Schneck followed the miscue with a two-run single. He went to second on the throw and then scored the third run of the inning when Rich Figuerua lined a single to center. Miguel Franquiz added a two-run single in the sixth, which provided the insurance runs that Rhode Island needed to hang on for the win.

Rich Figuerua gave up just one run through the final five innings to earn the win. He also went two-for-four with two RBI, the last one driving in the go-ahead run. His performance earned him Tournament MVP honors. “Rich shut down an awesome hitting team,” said Rhode Island manager Noah Clark. Figuerua got some defensive support in the eighth inning. Leading by two, the first two Tribe batters singled. With one out, Figuerua coaxed a double play groundout to end the inning. “We made some mental errors, 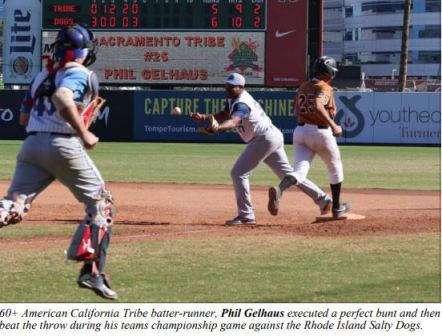 but made a great double play when it really counted and were able to hang on,” said a relieved Clark.

Timing is everything. All eight Rhode Island runs came after there were two outs. In the first inning, Figuera doubled in Franz Strassman to start the scoring. Rosario Carrion and Mark Jaenig followed with singles to plate two more and get the Dogs off to an early lead.

California fought back with a run in the second and two more in both the third and fourth frames. That set the stage for the three-run rally by Rhode Island in the fifth. Franquiz drove in the final runs for Rhode Island in the sixth, again with two outs. “Those two runs really helped us to get the momentum back on our side,” said Clark. The Tribe came back with a RBI groundout by Dave Dietrich in the seventh to account for the final margin.

The title game proved to be the rubber match between the Salty Dogs and Tribe. The clubs split a pair of close games on the way to 5-1 and 4-2 records respectively. “Our pitcher, Dan Pawelek, won one game and saved two,” 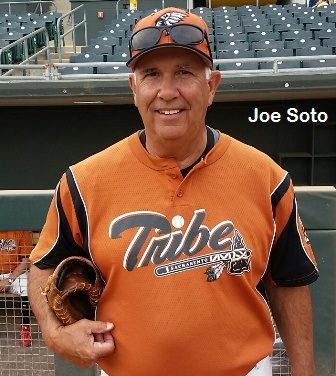 said Tribe manager Joe Soto. “He is our bulldog.” Pawelek went the distance in the title game but fell victim to an untimely error and some very clutch hitting by Rhode Island. “Danny is a tough pitcher,” echoed Clark. “He went the distance and we had to battle him all day long. He’s a championship pitcher and we were very fortunate to win the game today.”

After playing for together for 15-years, and moving though the age brackets, some things about the tournament have naturally changed for the Tribe. “Skills of course become diminished,” explained Soto. “But one thing that never goes away is the competitiveness. Sure things change over the years, but baseball is baseball. Once you get on the field everyone wants to be competitive, and we still are.”