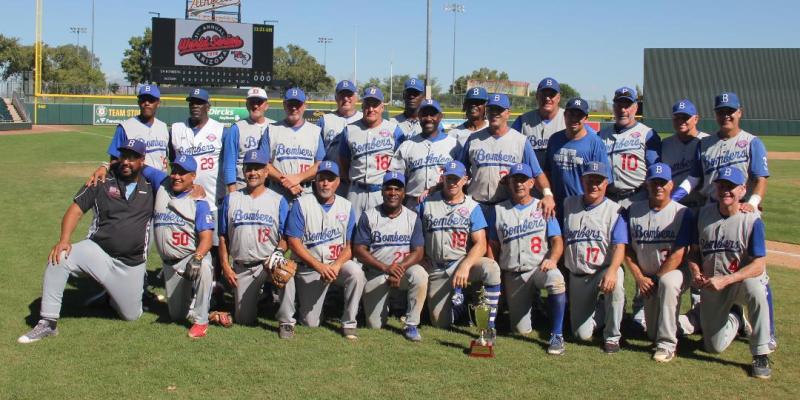 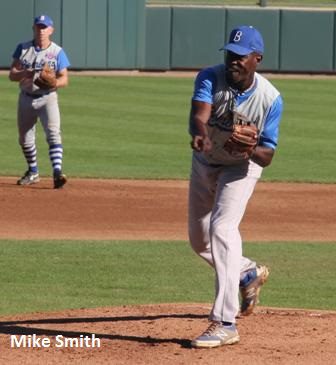 October 25, 2018, Mesa, AZ…The San Antonio Bombers edged TEAM Victory 4-3, scoring an unearned run in the top of the ninth to win a memorable 55 plus National championship game at HoHoKam Park in Mesa in the 31st annual MSBL World Series.  It was an incredibly well-played game, marked by dominating pitching and superb defense, but it ended inauspiciously—on an error.  That’s baseball.

The two starting pitchers were formidable opponents. Mike Smith, the right-hander for the Bombers, earned the win and MVP honors while Wil Flint, the southpaw for TEAM Victory, suffered a tough loss. He allowed Marvin Oliver to score from third on his own throwing gaffe. The errant toss was his team’s only error.  Both men pitched complete games.

Flint struck out 10 and walked one. Smith walked four and struck out one. He also had a double in the first inning and played a pivotal role in Flint’s meltdown after drawing a key walk in the ninth.

Oliver, the catalyst for San Antonio, was 3-4. He led off the game with a triple and scored two batters later 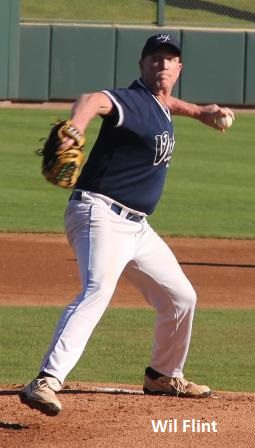 when Joe Kramer hit into a fielder’s choice.  Smith relied on his defense and Flint struck out one batter four times. They pitched scoreless baseball until the top of the eighth when the Bombers tacked on two runs.

In the bottom of the eighth, TEAM Victory tied the game. They capitalized on two walks; a double by Rosario Carrion, a fielder’s choice RBI by Buzzy Sailer and a key two-run single from pinch hitter Dave Brunette.

“I gave them life in the eighth inning,” Smith said.  His opposing pitcher did the same. Flint, who scattered seven hits, was disappointed when the Bombers scored eighth-inning runs off a blooper and a bad 0-2 pitch. “That killed us,” Flint said. “I should have been better.” 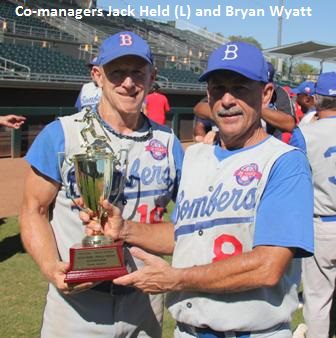 Flint was unable to get the 27th out before giving up the lead, and his mistake helped the Bombers secure the championship.  Here’s how it happened in the ninth.

The speedy Oliver reached base with his third hit of the game leading off the top of the frame, barely beating out a ground ball to the shortstop.  He advanced to second on a SAC bunt by Jack Held, the Bombers’ shortstop who made several sparkling plays on defense. Then, Joe Kramer flew out to deep left center, allowing Oliver to tag up and advance to third.  Smith walked and then it got interesting.

A few pitches later Smith stole second. Surprisingly, he started to walk back to first when he thought Dave Oliver, the batter, fouled off the pitch.  “I saw the batter swing and the catcher dropped it,” Smith said, “so I thought it was foul and started to go back to first base. Everybody’s yelling at me ‘get on the bag, get on the bag!’”  Meanwhile, Flint spun and threw the ball into the outfield as his shortstop drifted toward second base.

Oliver, watching the play from third, never anticipated a botched throw. “When he (Smith) started to walk back to 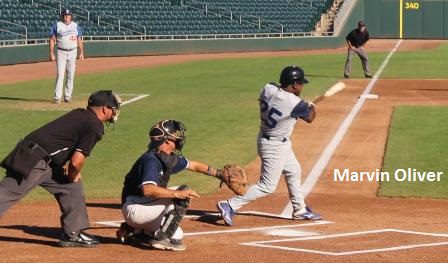 first everybody started yelling,” Oliver said.  Later, Flint admitted it was his fault. “I made the error,” he said. “I was on top of the rubber. He went that way and I threw it where he was. I missed it.”

When the baseball left the infield, the Bombers’ bench erupted. “I scored easily after that when the throw went through,” Oliver said.  After a championship game played so well by both teams, Held, the co-manager, observed: “Sometimes luck is with you,” he said. “That’s all it is.”

Bryan Wyatt, San Antonio’s co-manager, was happy with his defense and Smith. “Mike went eight innings yesterday,” Wyatt said, “and he goes nine strong ones today.”  The Bombers defense, especially up the middle with Held, Mike Smith (second base) and Lester Bedford (catcher), who threw out two runners, was sensational.

“Our defense got it for us,” said Wyatt. “The shortstop and second baseman have been playing together for 20 years and Lester has one of the best arms in this division. We play good defense, have timely hitting and good pitching. That’s our formula.”

Oliver was just as impressed by TEAM Victory. “They battled all game,” Oliver said. “My hats off to them. They are a great team.