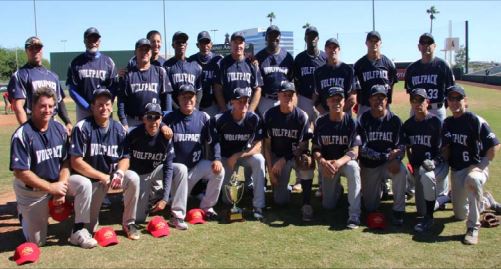 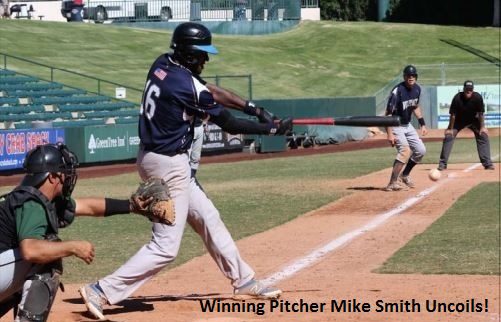 October 19, 2018, Tempe Diablo Stadium– A pair of timely hits and two costly errors by Tri-Valley helped Boston break up a scoreless tie with three runs in the seventh inning and capture the 50+National title at Diablo Stadium. Boston pitcher Mike Smith went the distance and allowed only one runner past first base to earn the win. Smith walked just one and struck out four to cap a shutout performance. “I knew it was going to be a good game,” said Smith. “Both these teams play really good defense. On the mound I just let them hit it into the wind out there and didn’t change my repertoire. I’m a fastball pitcher and if they can hit my best pitch, I just tip my hat to ‘em.” Smith throws about eighty percent fast balls but also has a slider and says that he shows them a changeup just to let them know he as it. “I pitched from ahead and made them put the ball into play and we used our defense,” said Smith. “I don’t get tired, I could pitch tomorrow if I had to.” 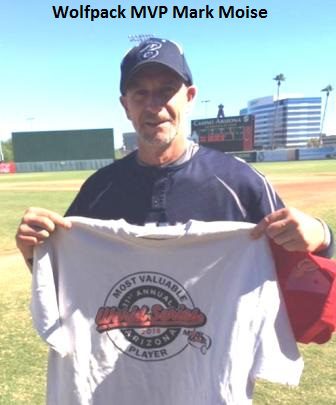 championship game. He went 2×2 and had a key hit in his team’s winning rally. “This is my sixteenth year coming for the tournament and I never get tired of it,” said Moise. “From the restaurants to climbing Camelback Mountain and of course, the baseball.”

Tri-Valley proudly wears their green and gold uniforms not unlike the Oakland A’s who play about 40 minutes to the east of their contingent. Tri-Valley manager Mark Murray has been coming to Arizona for the MSBL World Series since 1997. “Managing your bodies and your pitching is probably the most important part of navigating through the tournament,” explained Murray. “We have some solid pitching, throw strikes and keep our defense engaged.” Nando Naranja matched Smith through six scoreless innings before a couple of defensive miscues cost his club the lead in the seventh. Naranja finished with a complete game and was the hard-luck loser.

The Wolfpack’s game-winning rally started when Luis Cordova hit a slow roller toward first that was mishandled for an error. Cordova went to second on the play and Tri-Valley elected to intentionally walk Mark Whiten. Dean

Borrelli flied out to center and David Oliver grounded to second advancing the runners to second and third. Moise singled and then advanced to second on an error on the leftfielder as both runners scored. Eddie Fuller followed with an RBI single to close out the scoring.

Tri-Valley was 2-2-1 in pool play and defeated Team Victory 8-6 in ten innings to advance to the finals. The Wolfpack was a perfect 6-0 in pool play, knocked off the So Cal Blue Jays 11-3 in the semis before finishing their perfect tournament by beating Tri-Valley.