‘Kopitzke Shines on the Bump; at the Plate’

By Rodney Johnson, Special to MSBL 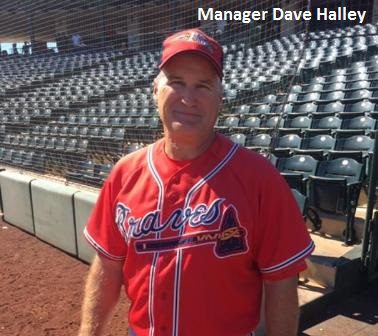 October 19, 2018, Tempe Diablo Stadium– A 23-run, 27-hit barrage capped the 2018 50 + Central title for the Raleigh Braves. But getting to he championship game was the toughest part of the tournament. A day earlier in the semi-finals, the Braves trailed the All-Star Baseball Academy 9-0 in the sixth inning and it looked like their 2018 MSBL journey would end. The Braves turned it on to score one in the sixth and three in the seventh to pull within five runs. In a miracle finish, the Braves scored six runs with two out in the ninth to pull out a 10-9 win and earn a trip to the finals. “It is probably the most incredible moment this team has ever had,” said Braves manager Dave Halley. Jeff Moore drove in the winning run with a 3-run double. “When the last run slid into home, the team erupted, tackled Jeff out at second base and were screaming and hollering. I’ve been coming here a long time, but that is one of the most incredible moments I’ve ever had here,” said Halley before the start of the championship game.

With a hard act to follow, the Braves were up for the challenge. “We knew we had one more hill to climb to get to the top,” said Halley. “Our guys knew that we had accomplished nothing unless we win this (championship) game.” The Braves were 5-1 for the tournament and their only loss was to the 3n2 Rangers, also 5-1. “They beat us pretty good the first time around, so we knew we had our work cut out for us,” continued Halley.

The Rangers took a 4-3 lead with a run on a sacrifice fly in the bottom of the fifth. It was like a call to action for the 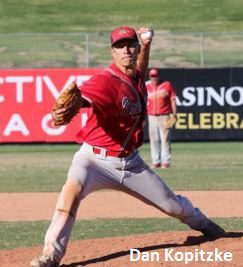 Braves as they exploded to score eight times in top of the sixth and take a lead that they would never relinquish. Raleigh sent 13 men to the plate, knocked seven hits and used three walks and a hit batter, to put their foot on the gas. The closest that the Rangers got again is when they pushed across five runs in the seventh to get within a 14-9 score. The Braves responded by batting around again in the eighth and scoring another eight times to seal the deal.

The Braves had their own version of the movies’ “Rudy.” Prior to the tournament, Halley got a phone call from a player who wanted to join the team. “John Micich called me and said, ‘Hey Dave, I’ve never won a ring and I’d like a chance to play on a championship team just once.’ I told him that he may not get to play much, but we would love to have you join our team,” explained Halley. During pool play Micich batted four times and got two hits. In the title game he may have heard the chants of “Rudy, Rudy” in his head as he came to bat in the ninth. That at-bat didn’t result in a hit, but Micich became a part of a championship team and earned his ring to prove it.

Dan Kopitzke pitched a complete game for the second straight day to earn the win and with it, the club’s Tournament MVP honors. Kopitzke piled up eight strikeouts on the mound and rapped out five hits to knock in six RBI at the plate.

“I tell people there are small orbit people and large orbit people,” said a philosophical Halley. “This group we have here is full of large orbit people who understand the ‘we’ is greater than ‘me’. It’s powerful when everyone is in that same orbit together, and we were.”