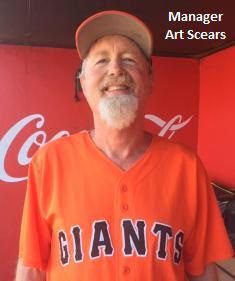 November 3, 2018, Diablo Stadium– Fernando Naranjo pitched a complete game to lead Tri-Valley past Chicago N TSP 7-2 in the 45 + Central Championship game at Tempe Diablo Stadium. Chicago took the early lead with a pair of runs in the second inning. Doubles by Mark Cibraro and Oscar Samano did the damage for the Lookouts. Naranjo shut the door the rest of the way allowing just three more hits over the last six innings. “Fernando is a small guy, but he packs a punch,” explained Giants manager Art Scears. “There’s no one I’d rather have on the mound in a big game.”

Tri-Valley forged ahead with three runs in the fourth inning. A run-scoring wild pitch and RBI singles by Calvin Thomas and Rahid Kahlil accounted for the runs. The 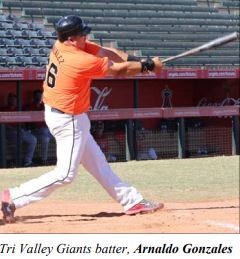 Giants never looked back. Naranjo didn’t allow a runner past second base after the second inning. “He throws three different pitches and really mixes them up,” praised Scears.

As Naranjo was shutting out the Lookouts, the Giants offense provided a cushion. Eric Pickett’s RBI double in the fifth inning made it 4-2. Tri-Valley added a pair of insurance runs in the seventh on a sacrifice fly by Matt Allen and a bases-loaded hit batter. They plated their final run in the eighth when Arnaldo Gonzales led off with a double and later came in to score on a fielder’s choice. Rick Carlson caught seven games for Tri-Valley in the tournament. His teammates call him “Ranger” because of his range on the field. 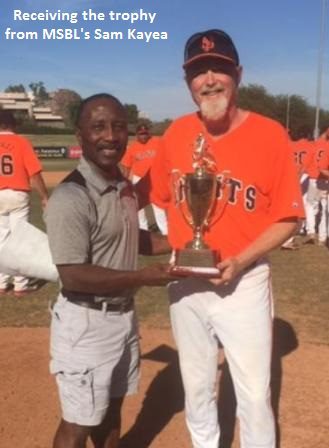 Chicago went 3-2-1 in pool play and advanced to the finals with close playoff wins against the Texas Redbirds, 4-3 and the Santa Rosa REBL Cards, 7-5. Tri-Valley was 5-1 in pool play. The Giants beat the Ventura Dodgers 14-8 and the Paramount Pirates, 10-3 in the playoffs.

Every team finds its own motivations. For the Giants, it was vindication.

Chicago had knocked Tri-Valley out of the tournament each of the past two years. In 2016 the two clubs met in the finals and Chicago won in extra innings. Last year the Lookouts came into the playoffs as the number eight seed and knocked off the number one Giants. “I think they probably have it in for us now,” said Chicago manager Tony Niezyniecki.

Chicago came into the finals shorthanded. Just a week earlier, one of the Lookouts pitchers, Dave Joseph, suffered a heart attack. Two years ago, Joseph pitched 40 innings in the tournament to lead the Lookouts to a championship. On Monday, another Lookouts 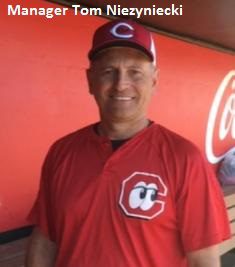 pitcher went down when Joel Pomerenk broke his arm. “Obviously we wanted to win for these guys,” said Niezyniecki. “But win or loose, we will always keep coming back. It’s the camaraderie that’s the bottom line. That’s the motivation….and of course, the ring.”