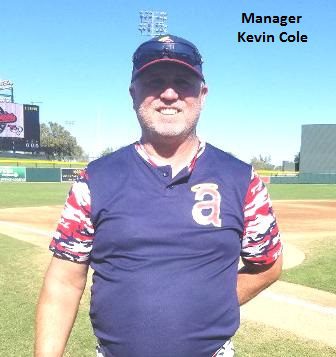 November 2, 2018, Hohokam Stadium, Mesa, AZ. – These two local teams knew that only one of them would walk into work on Monday morning with bragging rights over the other. Despite being very familiar with each other from league play and working together the 45 Cactus Division World Series was a high scoring affair with the D-Bat Angels besting the Arizona Marlins 13-10 at Hohokam Stadium.

“It was a back and forth game and heavily fought,” said Angel’s manager Kevin Cole. “Both teams are really good and our offense came to play.”

The Angels jumped out to an early 4-0 lead led by a two RBI single from Alex Cordova driving in Jim Rathbun and Mark Flatten. Still recovering from a broken hand suffered six weeks ago, Flatten was a spark plug for the Angels all day in the leadoff spot with a hit, two runs, an RBI and a sacrifice bunt.

In the fourth inning the Marlins responded by hanging seven runs on the scoreboard. Tomislav Kuraica had a two run single in the inning and Fernando Galvez and Jesus Alcantar also each drove in a run.

“Coming into the game we knew what we were capable of along with what they can do,” said Marlins manager 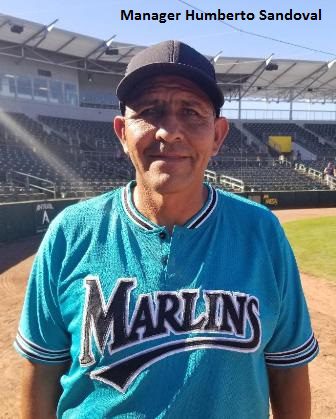 Humberto Sandoval. “That’s why baseball is so beautiful because you never know when you’re going to be on top.”

The Angels responded in the top of the fifth when Kevin Bay hit a triple to center plating two followed by a Rick Shaw single to tie the game.

In the sixth inning the wheels came off and the Angels took control of the game scoring six runs. Jose Solano and Shaw each doubled in the inning. With a comfortable lead Angel’s relief pitcher Craig Guegon was able to get into a groove not allowing another run until the seventh inning.

The Marlins clawed their way back into the game in the seventh inning when Joseph Dicarlo drove in two with a double to left and Galvez followed it up with his second RBI single of the game. Emeterio Hernandez continued the Marlins rally with a double to center bringing the tying run to the plate with two outs. The Angels turned to relief pitcher and team MVP Dave Blackburn who was able to get Miguel Esteves to ground out put out the fire.

“He’s been clutch all tournament,” said Cole. “Blackburn pitched in game two for the whole game and pitched the whole game yesterday so he’s definitely lights out.”

“Dicarlo came in the game in the semifinals and stopped the bleeding against the Padres,” said Sandoval. “He gave us a chance to score some runs and win the game. He wants to win and he’s going to do everything he can to make sure that happens.”

In pool play the Angels went 4-2 behind a recipe of strong pitching, consistent defense and timely hitting.

The Marlins played to a 4-2 record during pool play behind standouts Dicarlo and Jonathan Romero. Also, Ramon Apodaca proved to be a key piece in the field playing very good defense at shortstop throughout the tournament.

The Angels defeated the Spokane Cubs 10-4 in the semis earlier in the day to advance to the championship.

In the semifinals the Marlins dug themselves into a 7-0 deficit against the San Diego North Padres but were able to battle back to win the game 10-8.