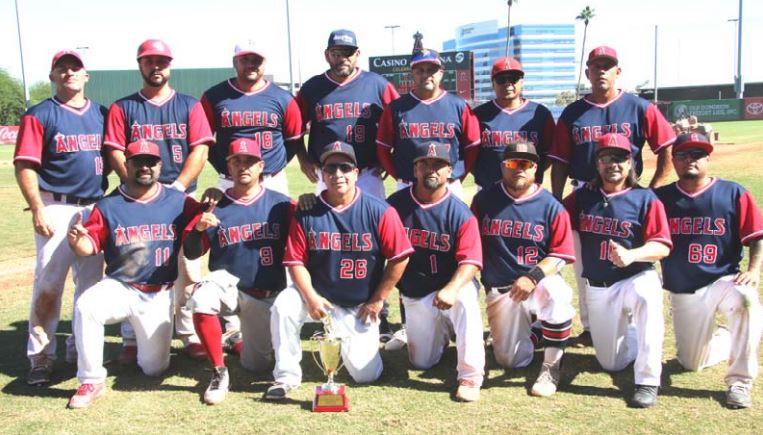 ‘Yanez and Nava Combine for Title on the Bump’ 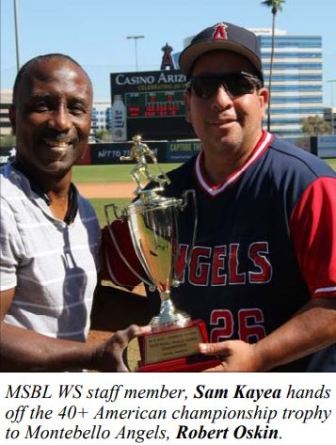 October 29, 2018, Diablo Stadium, Tempe, AZ– One pitch. After battling for seven games throughout the week, it all boiled down to one pitch; and then it was over. Ed Nava of the Angels struck out Long Island’s Louie Perez with the tying run ninety feet away to give Montebello a 4-3 win in the 40 + American Championship game at Tempe Diablo Stadium. “We didn’t have anyone else,” said Angels Manager Robert Oskin. “No one was up in the bullpen. It was Eddie’s game to win or loose.”

The Panthers took the lead in the first inning when E.J. McVety came in to score on a throwing error by the catcher. Montebello got even in the fourth when Brandon Heeding lined a one-out double to right field and then came home on consecutive wild pitches. The Angels took the lead in the sixth when three straight singles by Ian Valencia, Heeding and Louie Gonzales plated a run. Another scored on a groundout by Junior Esparza. An inning later, Andy Corona singled in what proved to be the winning run.

Trailing 4-1, the Panthers came up with a pair of runs in the eighth to draw within one. After Jason Short walked with the bases loaded, Nava came on with no outs and limited Long Island to just one more run leaving the Angels 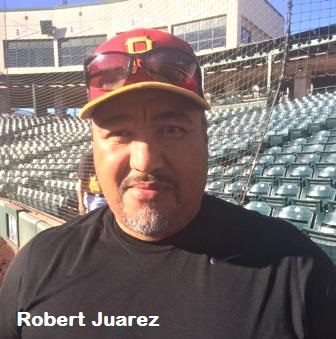 with a 4-3 lead heading to the ninth. Nava retired the first two Panthers to start the inning, but Long Island fought back. Rickey Medrano walked, stole second and went to third on a throwing error by the catcher. Frank Pinto then reached on a hit-by-pitch. With runners at first and third, Pinto stole second. “There was no way we were going to let them tie the game on a bad throw,” explained Oskin. “We weren’t going to give it away. Eddie went with all fastballs to make sure we didn’t give up the tying run on a ball in the dirt. We just left it up to him and he came through.” For his efforts, Nava earned a save and was named tournament MVP. Bobby Yanez who pitched the first seven innings got the win.

The finalists did not face each other in pool play as both compiled 5-1 records. In the playoffs, Montebello outlasted the Utah Rockies (4-2), 9-6 while the Panthers slipped past the Colorado Bandits (4-2), 8-7.

“One of the things we are most proud of is that we are not a sponsored team,” said Oskin. “This is our Saturday team from home and everyone pays their own way to come here. We do it because we love to play and love to spend time together.” The Angels celebration had to wait a bit however. Within a couple of hours after getting sized for their championship rings, the group was on the road headed back to California. “I’m sure we’ll have a get-together to celebrate once we get back,” said Oskin. Food, drink and tall tales to tell about another trip to the MSBL World Series. Who could ask for more!