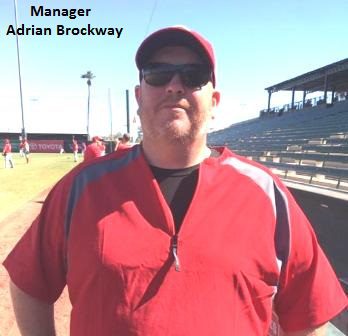 October 20, 2018, Diablo Stadium, Tempe, AZ– From mid-October through March, the Puget Sound area receives about 75% of its’ famous average annual rainfall of about 40 inches. The most of the team is from the nearby Seattle area. They brought a downpour of a different kind with them to Tempe Diablo Stadium at the 2018 MSBL World Series. The Reds rained 19 runs and 21 hits down to overwhelm the Nor Cal Knights in the 35 + Championship Game. The Knights managed only five runs on seven hits as their title hopes were washed away by a 7-run fifth inning storm surge.

The Nor Cal Knights came to the tournament from the Sonoma/Santa Rosa, California area. The Knights jumped out to an early lead with two runs in the first inning on back-to-back, two-out RBI singles by Dan Wood and Casey Thornhill. The Reds scored a run in the bottom half of the inning and then got even on an RBI single by 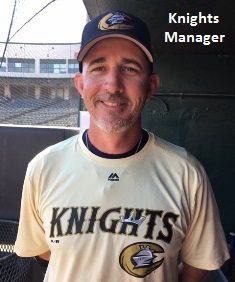 Nikola Brown in the third. Puget Sound sprinkled in a pair runs the next inning on RBIs by Jason Rivers and Cory Coate to take the lead. In the fifth, 12 Reds batters came to the plate, seven runs scored and the rout was on. Nikolaus Korchinowski, Joe Haller, and Brown each contributed 2-RBI hits in the rally. Korchinowski and Raffale Riconosciuto each had four hits in the game and were named co-MVPs. “This was really a team effort and I can’t just give it to one,” explained Reds manager Adrian Brockway. “We’ll just pass the (MVP) shirt around if we have to.”

With an 11-2 lead, Puget Sound saw Nor Cal try to come back with a pair of runs in the top of the sixth. In the bottom half of the inning, the Reds put the game away for four more tallies. “We knew that they weren’t going to just roll over, so we had to keep the pressure on,” said Brockway. “We were relentless.” After the Knights scored a token run in the eighth, the Reds pushed across four more in the bottom half of the inning to account for the final margin. Scott Miller replaced Jason Rivers on the mound in the fourth inning and went the

next five to earn the win. “Jason had a rough start, but Scott came in and helped us regain the momentum to win the championship,” said Brockway. “That’s what we came to do.”

The 35 + Cactus Division was broken into two groups. The Reds went 5-1 to win group 1 while the Nor Cal Knights

finished in second place with a 4-2-mark in-group 2. In the playoffs, the Reds beat the Seattle Royals 14-4 and the Minnesota Lumberjacks 11-6. The Knights nipped Easton Storm 7-6 and then outlasted their division winner the Chandler Bat Philadelphia 18-16. Chandler had been undefeated before the semifinal loss. They were 6-0 in pool play and had won their playoff game against the Rose City Goats 11-0.

Perhaps Puget Sound is starting a ‘reign’ of a different kind. “It can be hard to keep a team together,” said Brockway. “But we are going to do everything we can to get everyone to come back next year to defend.”