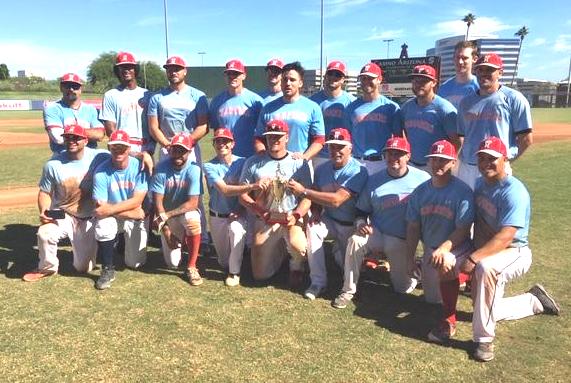 October 24, 2018, Diablo Stadium, Tempe, AZ– There is no clock in baseball, you never run out of time. But in this seesaw battle, the So Cal Titans finally used up all of their outs as they fell to the The Kansas City Monarchs 10-9. Trailing 3-2 going into the sixth inning, Kansas City exploded for five runs and found themselves with a 7-3 lead in the seventh. They managed to hold off a late Titans rally to win the 25+ National Division championship game by a 10-9 count. 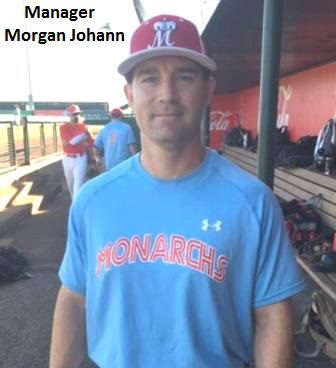 “Team chemistry is what we are all about,” said Monarchs manager Morgan Johann. “We have a good time. We like to talk trash about one another and give each other a hard time. We just keep it loose and that’s how we have fun.”

The Titans jumped out to a 3-0 lead with a pair of runs in the second inning and single tally in the fourth. In the bottom of the fourth a 2-RBI single by Fernando Esquival kept it close. After a scoreless fifth, the Monarchs jumped out on top by scoring five times in the bottom of the sixth. With the bases loaded, back-to-back hit batters started the scoring. With one out, RBI singles by Marc Burchard and Jordan Hurtt plated two more. Johann drove in another run with a sacrifice fly.

The Titans just fell short of making it a fantastic finish. After they pushed across two runs to pull within one with

two out, lefty Blake Kolons got Erik Silva to ground out with two runners on base. Kolons went the distance working around 13 hits; three walks and two hit batters. “It was a struggle, but he hung on,” said Johann. “Blake has good movement on his stuff and a firm fastball. He’s our guy.”

In pool play, the Monarchs finished 3-1-1 and the Titans were 2-2-1. In the playoffs, Kansas City downed the So Cal Snappers 13-1 and the Titans nipped Team Marucci 7-6 to advance to the finals.

“Staying together was good for us,” said Johann. “Seventy-five percent of us stayed at the same house where we cooked some food, hung out and got ready for the next game. The most special thing about this team is that we are here to play ball. We get here early, are ready to go and have a good time. That’s just what we did.”