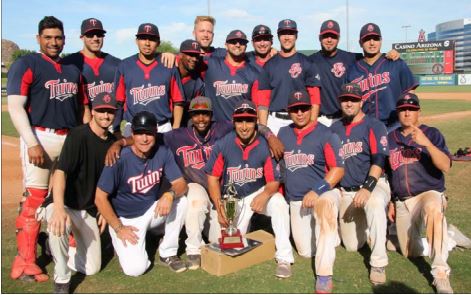 ‘Mecott Leads the Drive to the Finish’ 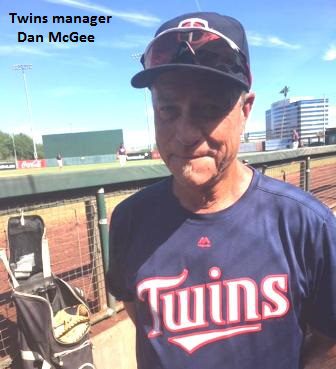 October 24, 2018, Tempe Diablo Stadium– Like a fast moving train on a downhill track, the Santa Clara Twins were impossible to stop. Just ask the Westside Bandits who got in their path. The Twins rolled to a 15-1 win in the 25 + Mountain Division championship game at Diablo Stadium. The Twins stacked up 24 hits in a deluge that started in the first inning and didn’t end until they scored their final six runs it their last at bat. “It looked like a dinner plate and we were busting it,” Twins manager Dan McGee colorfully explained.

Tournament MVP Matt Mecott was one of the top hitters for Santa Clara. In this game he went 3-for-5, scored two runs and knocked in two RBI. “What he has done over the past couple of days has been just tremendous,” said McGee “…about 15 RBI, four or five doubles. He really hit the ball well from the bottom of the lineup.”  While it is hard to look far beyond the 15-run offensive explosion, McGee’s biggest worries were about his defense. “I knew we would score runs. What I was more worried about was our defense. I knew if we didn’t make 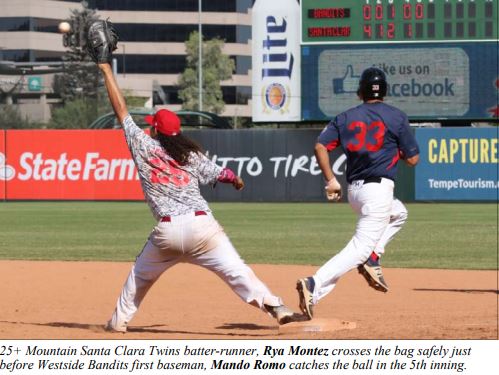 errors, we had a good chance to win.” Center fielder Trevon Jackson was a big part of that success as he accounted for eight putouts and constantly ran down potential hits.

You can’t win ‘em all, but even so, the Bandits have had their share of success. This was their eighth year in the tournament and their fifth championship game. They had won in two of the previous four tries. “It’s always fun,” said Bandits manager Robert Luna. “This is such a great tournament, it is like Christmastime for us just to be here.” The Bandits (3-2-1) entered the playoffs as the fourth seed. Fighting their way to the top, Westside won playoff games the day before against the Dallas Orioles 4-3, and the Columbus Pirates 9-4. 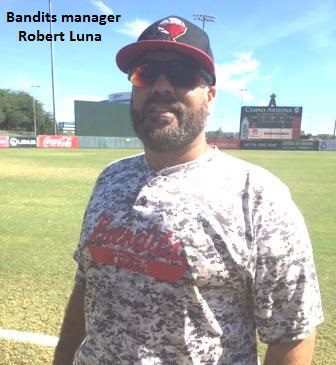 Twins catcher Mark Martin was proclaimed the ‘Beast of the Week’ for going behind the plate for all 18-innings of the two games. “Overall, there are games where we struggled and games where we played really well,” said Luna. “We are just a scrappy bunch.”  For Luna, the tournament was about much more than winning. “I couldn’t play the last two years. This year I came back after hip replacement surgery,” explained Luna. “It felt good to get a hit yesterday even though I still don’t run so well. At the end of the day, we are just thankful for this joyous tournament atmosphere.”

The Twins journey to the finals wasn’t without a bit of controversy. Santa Clara posted a 3-1-1, third place finish in pool play. In the playoffs they coasted past the Rocky Mountain Oysters by a 7-1 score. In the semifinal game, the Twins won in a walk. “I filed a protest because they (San Diego

Athletics) had a AAA pitcher and unfortunately they had to forfeit,” explained McGee.

Santa Clara erased any controversy with a convincing win the in the finale. Pitching, hitting and defense; the Twins displayed healthy helpings of all three. It proved to be perfect recipe to cook up a championship ring.