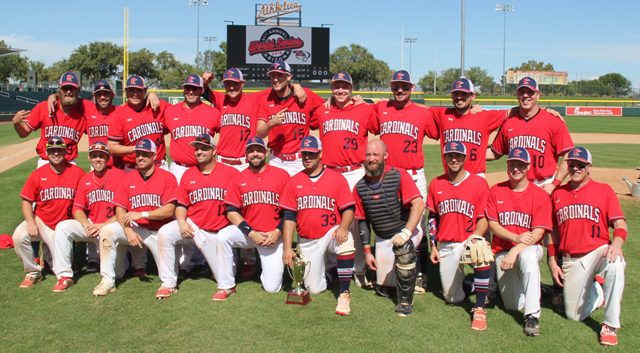 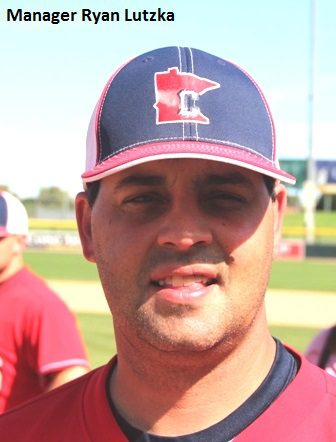 October 24, 2018, Mesa, AZ…MVP Dan Casazza was 3-4 with two triples and a double and scored four runs to lead the Twin City Cardinals over the Denver Kokopelli’s 12-10 in the 25 plus Central championship at Mesa’s HoHoKam Park. Teammate Jeff Heath, who also pitched 4 and 2/3 innings, was 3-4 and also scored four times. Both Cardinals had timely triples during a four-run seventh for the Minnesota-based team. 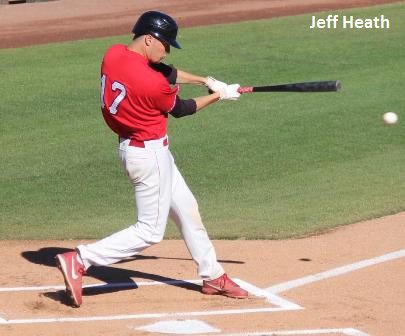 Gaddis in the second.

“There is just so much fight in this team,” said Cardinals (6-1-1) manager Ryan Lutzka. “All tournament we’ve had to come back in close games. They are a class act and a great group to coach.” Lutzka said Heath, like all his guys, played a critical role in the tournament. And Casazza, Twin City’s MVP, was even better. “Heath came in (to pitch) and he’s been our guy all year and got us a chance to get back in. And with Dan, I mean what can you say? He’s just a clutch guy. He’s the best player. His hitting today was just on point.” 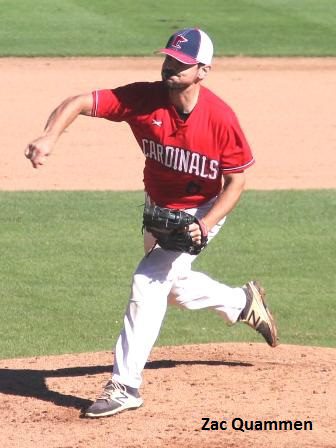 The championship game, full of ups and downs, was a seesaw affair. Denver (6-2) scored twice in the bottom of the sixth to take a 9-6 lead. Redman and Dunn scored after Brian Frawley, who had a sacrifice fly, and Layton Marcy, who singled, knocked in key runs. Lutzka brought in Zac Quammen, who earned the win, to relieve Heath.

Twin City rallied with four runs in the top of the seventh as Heath and Casazza, hitting in the three hole, tripled to help the Cardinals take a 10-9 lead. Leadoff hitter Matt Stengel and Jackson had hits in the inning. “It’s been a long week,” Heath said. “You just have to lay it all on the line. When you’re at the plate it’s just seeing the ball. You’re going to see multiple pitches in multiple at bats. We’ve been doing this all week, grinding as a team. It’s been fun.”

With Cabrera hitting a game-tying single, Denver knotted the game at 10 in the bottom of the eighth. With Jordan Jereb on the mound, Heath reached on an error in the top of the ninth. That 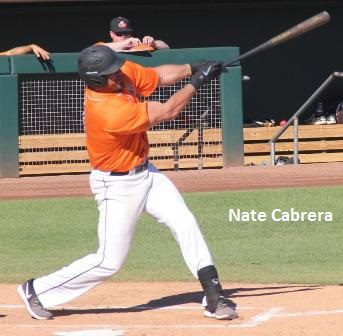 brought up Casazza, the left-handed hitter who had pounded extra base hits in his previous two at bats. He promptly doubled down the first base line. Emery Hull scored Heath with a single and Peter Ridley added an insurance run with a sacrifice fly to score Casazza.

Quammen allowed two base runners in the bottom of the inning, but a ground ball to third ended the high-scoring game. “Dan made me run miles today,” Heath said. “But the mentality (in the ninth) was to find a way on. Go as hard as you can and leave it all on the field.”

Casazza said it couldn’t have been a better day for him. “All I knew was that Heath needed to get on,” Casazza said. “And I was locked in all day. Their first guy (Dunn) was a really good pitcher. I was going to make something happen. I was pasting the (right field) line today. The funny thing is I’m usually an opposite field hitter. But they kept working me in and I just went with the pitch. It feels good to be MVP, but there’s a ton of MVP’s on this team…six or seven at least.”