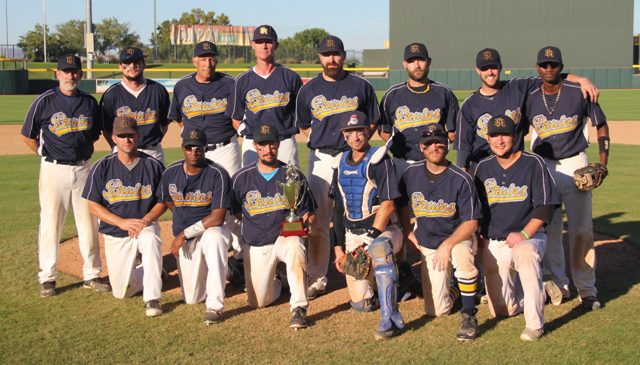 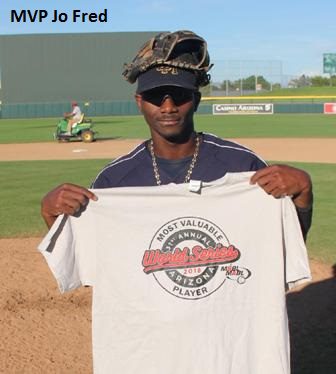 October 24, 2018, Mesa, AZ…MVP Jo Fred keyed a four-run eighth with a three-run double as the Des Moines Bruins rallied to beat the San Jose Marlins 10-7 at HoHoKam Park in Mesa in the 25 plus Cactus championship game.

Fred, hitting in the eighth spot in the batting order, was 3-4 with four RBI, including a RBI triple in the seventh. Will Scholer, the Bruins’ third pitcher, picked up the win despite allowing the Marlins to score three runs in the top of the eighth to take a 7-6 lead. He recovered to pitch a scoreless ninth. Jason McPherson pitched five scoreless innings for Des Moines and Jeremy Green pitched the sixth and seventh.

Fred thought a pitching change helped him adjust late in the contest. “In the beginning of the game the pitcher (Hastie) was throwing real hard,” Fred said. “The next pitcher, a lefty, I was able to see good. Usually everything tails away and I was looking for something to go the opposite way. He gave me that and I was able to drive it and help the 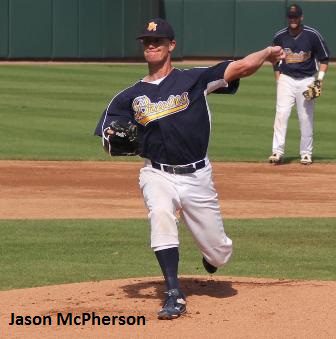 Zach Young started the Bruins eighth inning comeback with a single. Scholer, who was 2-3 with two RBI, walked. Tanner Linden also drew a base on balls, which set the table for Fred’s double.

When Fred hit his triple in the seventh inning he blistered a pitch into left center field. “My approach was to hit something up the middle and fight for something I wanted,” he said. “But the pitch was a little bit in and I was able to drive it. But it was a really good game. Those guys fought hard and battled back and forth. We just had to outhit them.” 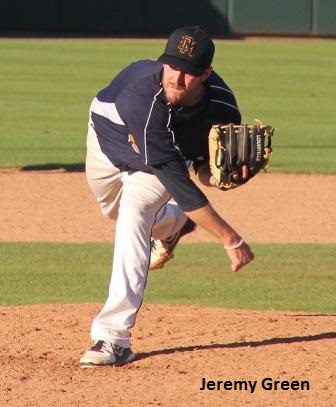 Eric White, who was 2-4 with two RBI, contributed a run-scoring hit in the seventh for the Bruins. Green did as well.  The Bruins finished the week 7-1 while the Marlins ended up at 4-4.

Bruins manager John Linden said it was a hard-fought game. “Every time they

answered we answered back,” Linden said. “It took us a while to get going, but we answered the bell when they put a number up. It was good perseverance on our hitters. We didn’t play real clean and put ourselves in a little bit of a hole. All the guys have been coming up with big hits all week. Jo Fred hit his

gap in that eighth inning. There was none bigger than that one.”

Rickie Hastie, the starting pitcher for the Marlins, allowed three runs on five hits before he left in the sixth inning. Hastie was also 3-4 at the plate, while teammates Joseph Olmos was 2-4 with four RBI and Brian Holman was 2-3.

In the end the Bruins had just enough pitching. “Jason was a workhorse that started the game,” Linden said. “He 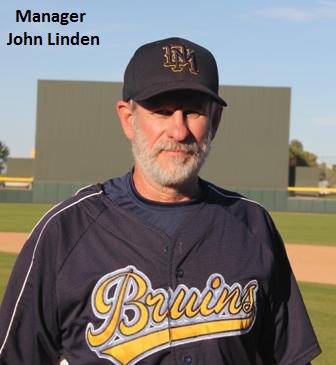 threw in four games this week. Jeremy had been pitching great all week as well. Will Scholer came in and got the win. Adrenaline took over and he made some great pitches in perfect spots.”