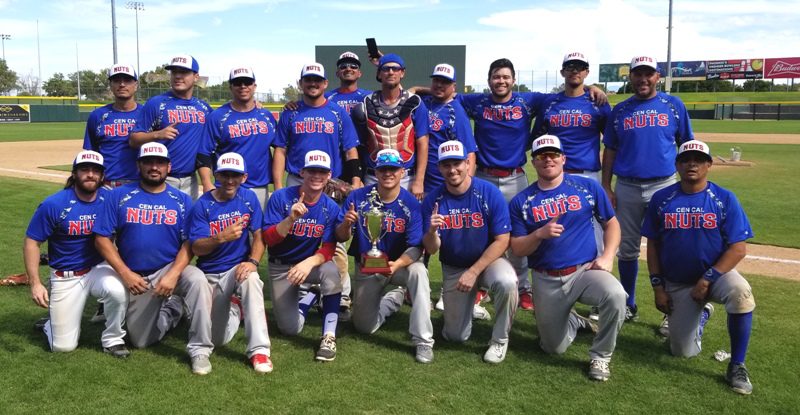 By Jason Johnson, Special to MSBL 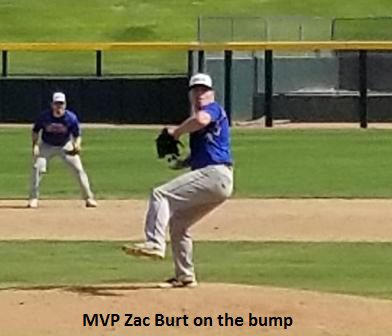 October 21, 2018, Hohokam Stadium, Mesa, Ariz. – With the summer monsoon season winding down in Arizona the Storm was hoping for one more microburst at Hohokam Stadium when they faced off against the CenCal Nuts for the 18 Central championship. The Nuts, however, were able to take advantage of costly errors by the Storm and team MVP Zac Burt pitched a stellar complete game for the Nuts to capture the title.

Heading into the game the Storm had relied on their strong defense throughout the tournament which allowed their pitchers to pitch to contact and focus on throwing strikes.

With the Storm ahead 1-0 in the fourth inning the Nuts capitalized on two errors in the inning along with a sharply hit ball to the shortstop that took a bad hop off his chest which was scored an infield single. David Beckenhauer scored on an error by the shortstop and Richard Barragan scored from third base when the pitcher threw the ball away on a pickoff attempt to first.

“We battled all the way and never gave up,” said Nuts manager David Geiger. “We played pitch by pitch and 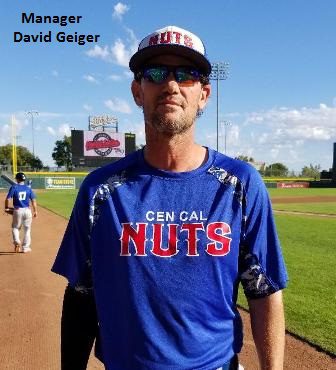 persevered through the day. All tournament we’ve been battling back and that experience helped us today.”

After allowing an RBI double to the Storm’s Roman Padilla in the first inning Burt buckled down allowing just four more hits over eight shutout innings the rest of the way. The Storm brought the tying run to the plate in the ninth but Burt was able to get Austin Wilson and Adam Geyer out to end the game.

“We (Geiger and Burt) play on opposite teams of each other in our league and he threw 15 innings in the championship game against us,” said Geiger. “He had a real gutsy performance today as well.”

Burt had some help behind him as well from center fielder Beckenhauer who tracked down several fly balls that looked like they were going to drop in for a hit. Beckenhauer also went two for three with a walk, run and run batted in from the leadoff spot. 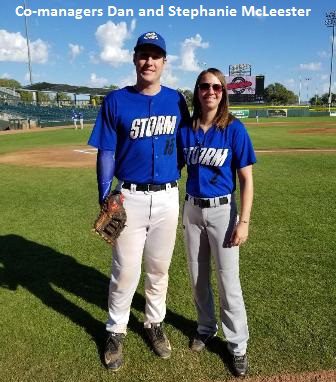 “He runs down everything and probably saved us eight to 10 runs in the tournament,” said Geiger.

Since their inception five years ago, the Storm have improved each season they’ve played together and despite not coming home with their first championship they are confident they will be back in the championship game in the future.

“Our performance was night and day from last year to this year,” said co-manager Stephanie McLeester. “We have a much improved team and will be back.”

During pool play the Nuts battled to a 3-2 record.

The Storm finished pool play with a 4-1 record capturing the first seed in the playoffs. Joe Longo pitched seven strong innings in the final game of pool play allowing the Storm to rest most of their arms heading into the playoffs.

game. A critical moment came in the eighth inning when the Nuts turned a triple play with the game tied to kill the rally. With the score still tied at four in the 11th inning the Nuts scored on a bases loaded walk and a broken bat single from Mike Lagow for the insurance run and were able to hang on in the bottom half for the win.

In the semifinals the Storm defeated the Antelope Valley Reds 6-3 with Luis Martinez earning the win. The Storm was able to get out of two big bases loaded jams during the game by turning double plays which helped them cling on to their narrow lead and shut down the rallies.