By Mike Camunas, special to MSBL

November 18, 2017, Dunedin, FL — Steve Zumpano would never play for another manager, nor another team for that matter. And that’s a good thing because Fedlock would hate to lose its MVP after Zumpano helped lead Fedlock to a 7-6 win in the 50 National Championship at Florida Auto Exchange Field on Nov. 18.

Jeff Himan hit a game-winning RBI single in the bottom of the eighth to break a 6-6 tie and secure Fedlock’s 10th overall title and first since 2013. 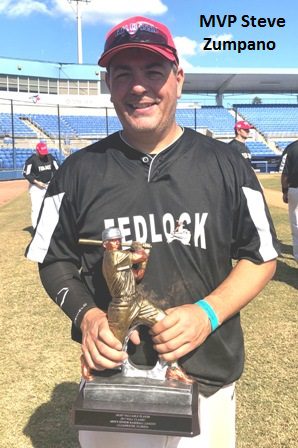 “We knew coming in this was going to be a great game,” said Zumpano, who went 3-for-3 with a run scored and two stolen bases, “and I don’t think they had their best pitcher out there, but our motto all week has been, “One pitch at a time … keep the energy up … keep moving guys up … know your role and your job — that was our motto all week and it paid off.”

Down 6-3, the Reds scored three in the top of the eighth to tie. Center fielder John Dragos led the Reds with two runs, including one of the three in the eighth. “When we got up early on them, we know it wasn’t over,” Zumpano said. “We knew they could and even would come back — it could have been anyone’s game.”

Fedlock’s Ray Lloyd, who also had two RBI, came on in relief in the ninth to get the final two outs for the save. Reds starting pitcher Mike Mills went 2+ innings, giving up five runs. Dave Pannullo came in to relieve and threw 5+ innings while giving up only one run.

“Give them a lot of credit, they are a solid team,” Fedlock manager Dave Cross said. “We made some base running mistakes, and they just took advantage of every mistake we made to stay in the game, but we got the clutch hit to win the game.

“The one thing we’ve been fortune to do is have great defense, and we had a few errors, which is uncommon for us, but Jaime Wright, our shortstop, was just been phenomenal for us.”

This is the fourth title for Zumpano and he was glad Fedlock was able to return to the championship and overcome last year’s early exit.

“Last year, we thought we were in a good position,” Zumpano said, “but we just ran into a game where we hit a lot of ‘at-them’ balls and lost 5-3 — but this is a great group of guys, great manager — great guys and I wouldn’t play for anyone else or any other team of great guys.”