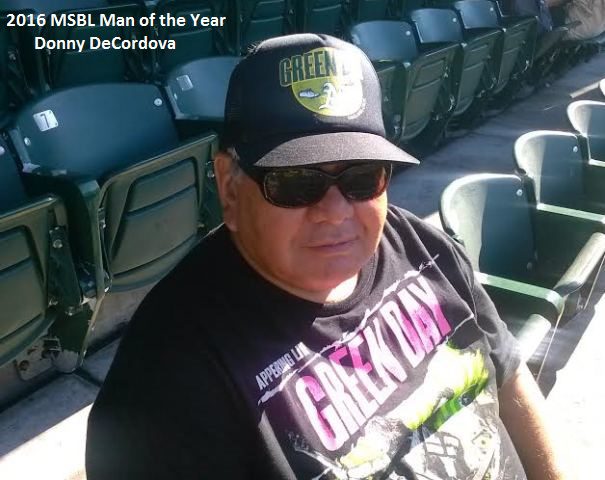 Long-standing MSBL member and head cheerleader Donny DeCordova has been named the 2016 MSBL ‘Man of the Year’, as determined by MSBL Founder and President Steve Sigler. The 68 year old puts down his roots in the Tri Valley MSBL in the bay area of California and is a national and regional tournament participant and team manager, not to mention a 2009 inductee into the MSBL World Series Hall of Fame. Why is Donny in the World Series Hall of Fame? His qualifications are unparalleled.

For starters, Donny is managing ten teams this year at our MSBL World Series beginning in less than a month. Yes, ten! “This year I’m taking one each in the 70’s, 73’s, 50’s and 25’s,” explained DeCordova. “Then to round things out I am managing two teams in the 65’s, two more in the 60’s and then two Father/Son teams. I do all of the fee collecting, lodging, etc. and if I’m there at the field I’m in charge but there is always a second in command to take over if there is a scheduling conflict. I try to have a manager on each team to help and I am the general manager. I tell them ‘if I can’t be there, then you be me on the field.” 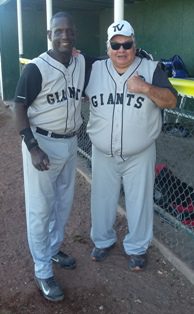 Arizona resume. One can only imagine how many championships he must have by sending so many teams to the big dance for so long. I’ll let Donny explain it. “I’m the biggest loser in MSBL player history because we have never won! When you sign up with one of my Tri Valley Giants teams you will play all the time and it isn’t about winning at all costs. You may not win a ring but you will play a lot of baseball. My players are like family and they always want to come back.”

Donny’s actual playing days began back in 1961 in Houston while watching other kids playing ball through the chain link fence and hoping they’d ask him to play. They eventually noticed him and the future hurler played a lot of ball in a lot of different locations around California and Texas because the family moved around quite a bit. He was making a name for himself on the mound at Navarro Junior College in Corsicana, Texas but the military and marriage put life in perspective and like so many other MSBL members, baseball had to wait until a few years in the future.

Donny is married to Shari, his bride of 33 years, and is his biggest supporter and organizer. “I would be lost with her help,” explained Donny. “I have so much to keep track of but she understands 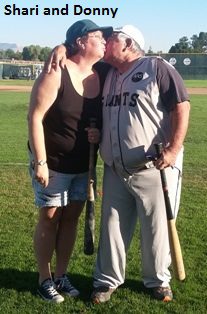 my passion. She is actually the one who saw the MSBL ad in the paper in 1990 and encouraged me to go try out. I don’t think she knew what she was getting herself into!”

Donny and Shari live in Rohnert Park, California and Donny continues to play on two league teams. He plays in the Tri Valley MSBL 65-over division and the Redwood Empire Baseball League for the 62-over Vets. “I’ve put on a few pounds over the years so it’s tough to play all the time. I still pitch once in a while but I try to put the other guys ahead of me.”

Donny and the Giants can be found pretty much all year long playing in MSBL regional tournaments in San Diego or Woodland-Davis or anywhere baseball is being played out west and you can also be sure he will be in Las Vegas, Arizona or Palm Springs at our national tournaments.

Donny doesn’t think he did anything special to deserve this award. Yeah, right. “The World Series or any national tournament is so wonderful because everything is there to assemble teams, like a player pool. I use a ton of pool 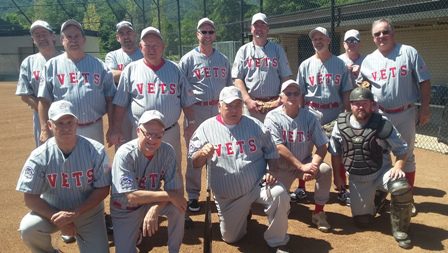 players to fill out my rosters. You can always make it work,” said this year’s recipient. “It’s not about the rings, it’s about everyone getting a chance to play. I find ways for them to play. If I have one message to share it is not to judge guys on their age. The older guys should also have a place to play. 65-over divisions were organized because 50-over teams didn’t want them anymore. That’s understandable, I guess. But I want everybody to have somewhere to keep playing.”

“I remember in 1990, the inaugural season of the Redwood Empire MSBL, we asked the local newspaper to run a story about us. They declined and said we wouldn’t last three years but if we did, come back. We did and we did. As I wipe away the tears I can honestly say that this is the most recognition I have ever received in my 68 years of life. I have never been recognized for something so easy and enjoyable.”