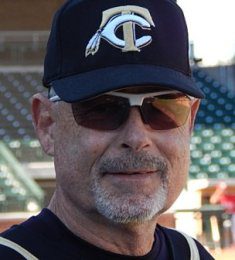 Nobel Prize winning doctor, missionary, philosopher and musician Albert Schweitzer once said, “You must give something to your fellow man, even if it is a little thing. Do something for others, something for which you get no pay but the privilege of doing it.” Sacramento MSBL member Jin Tygrett-DeNuzzi took that message to heart. After serving a three year term as league president from 2009-2012, Tygrett-DeNuzzi, at the urging of league brothers, returned to that post in 2013 when his successor stepped down.

That’s just one example of Jim’s selflessness and is the main reason why he was among four people inducted into the 2013 class of the MSBL National Hall of Fame. Aside from being a top administrator, Tygrett-DeNuzzi is a player who has also been to the MSBL World Series mountain top more than once and was a World Series MVP in 2009. MSBL Founder and President Steve Sigler noted Jim’s contribution this way: “Jim possesses every quality not only necessitated by an adult baseball league but for any company in need of highly organized, dedicated and experienced leaders.”

Here are some of Jim’s accomplishments throughout his MSBL career:

.Since 2000 served as league commissioner, secretary, treasurer and vice president

.7th member of the Sacramento MSBL to be inducted into the MSBL National Hall of fame

.Established the Sacramento MSBL as a 501c non-profit corporation in 2011

On the field, Darren Brucken knows only one style of play-the Pete Rose, crazy hustle, give-it-all-you-have way. He runs hard on every hit to the infield and it is said he’ll knock down a wall in the outfield if it helps his team. He plays with contemporaries in the 38-over division in Terre Haute, but he also continues to challenge himself by suiting up with kids half his age. Brucken has been to every MSBL World Series since 1997. A family physician whose wife, Holly, is a physical trainer. Brucken takes his ‘all out’ mentality to the league board room as well. He was vice president from 1997-2004 then took over as president in 2005.

“I can’t please everyone, I have to think about what’s best for the league.” That was Stanislaus MSBL president Clint Romero commenting. That’s the spirit that has landed Romero in the MSBL Hall of Fame. The husband, father of two daughters and regional sales manager for Diebold, Inc. has done much to improve the league from ushering in wood bats to getting the league set up with a new website. “The goal is to have a competitive, respectful league,” said Romero. “I believe what sets us apart from the other baseball leagues is the integrity and standards that we have set forth.” “The Stanislaus MSBL is a model of excellence for smaller market leagues, thanks in part to the hard work and dedication of Clint Romero,” said MSBL Founder and President Steve Sigler.

Wally Brant rediscovered baseball in 1987 when he became an extra in the Hollywood film ‘Eight Men Out.’ Brant pitched for the Purdue Boilermakers from 1967-1969, played ball with the US Air Force while stationed with his B-52 Bomber group on Guam from 1976-1978, and helped form the Indianapolis MSBL in 1989. Brant was in and out of the league presidency in Indianapolis but his opinion and leadership was still valued. “He was the ‘go to’ guy for most of the league business for over 20 years,” said friend and longtime league player Robert Vote. League member Gary Knowles added, “Were it not for Wally Brant a lot of us would not be playing.” Brant started the over-40 division, a division which later spun off into successful 35 and 45 divisions. In 2011 he retired from playing after 22 seasons. The Indianapolis MSBL declared July 18, 2013 as Wally Brant Day to coincide with his induction into the MSBL National Hall of Fame.

Twenty-one years after rediscovering the game he loves, Larry Bergren is one of the main reasons why amateur adult baseball is alive and healthy for many in the Las Vegas area. Bergren, a member of the MSBL World Series Hall of Fame class of 2007, has played on and managed many World Series teams. His dedication to adult baseball in his home town, his strong track record for effective, organized leadership, and his passion for not only playing but for giving others the opportunity to play, is why MSBL Founder and President Steve Sigler chose the 51 year old Vegas Valley MSBL president to be inducted into the MSBL National Hall of Fame.