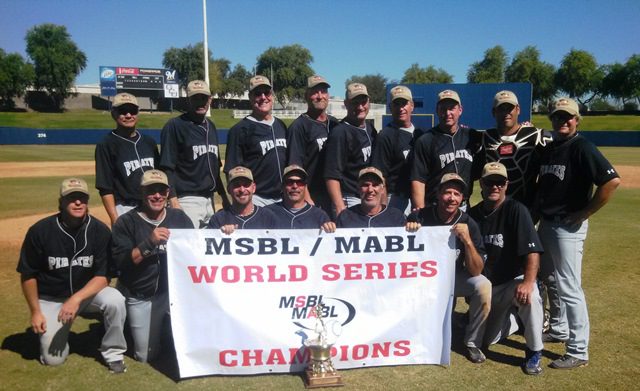 Once they heard that the 50 Central Division finals would be held at the Spring Training home of the Milwaukee Brewers – the Maryvale Baseball Complex — Randy Miles’ Utah Pirates felt right at home.

One of the Pirate pitchers, Neil Warner, grew up in Wisconsin watching the Brewers, and even came to see his team in spring training at Maryvale. For a die-hard Brewer fan, and a guy who wore his Brewers hat all week, it seemed like fate.

And as fate would have it, Warner’s Pirates claimed a 9-6 win over the Long Island Yankees on that very field. “When I found out it was at Maryvale my eyes lit up,” said Warner, a sports writer for 22 years. “I didn’t know until the playoffs started but after that I was excited to play on this field. It was pretty special.”

The whole week was special for the Pirates as 10 of the team’s 17 players won rings for the very first time. That group included Duane Privett who was ringless in 20 tries at the tournament since first attending in 1992. “It was pure elation after waiting all of these years,” Privett said. “When we got the final out it was just awesome.”

Warner didn’t just stand around gawking at his surroundings all day; he did his part on the mound. The right-hander went eight and a third innings with seven strikeouts and five walks before giving away to 61-year-old Danny Pawelek — the winning pitcher in the semifinal game.

It was the offense that put the Pirates in the best position to get sized for rings.

A four-run fourth inning erased a 2-0 deficit as Phil Young hit one nearly to the left-field warning track only to see it go in and immediately out of the left fielder’s glove. Chad Foster added a two-run double in the inning.

The Pirates added two more runs in the fifth as Foster, who had three hits and four RBIs on the day, and Brady Field, each drove in a run.

The Pirates, who went 8-1 overall and 5-1 in pool play, put it away with three runs in the eighth after team MVP Dave Carter started the inning with his third hit.

“Everything went according to plan,” manager Randy Miles, 50, said. “We really couldn’t have done much more right all week.”

In a bid for their first ring, the Yankees finished as runners-up for the third time counting two second place finishes at the Fall Classic in Jupiter, Fla. in 2010 and 2011. It was easy to pinpoint the cause.

They couldn’t get the big hit when they needed it. The offense, led by Randy Hughes’ three hits, loaded the bases twice – once in the fourth and once in the sixth – and came away with only a run.

They didn’t get the big catch when they had to have it. The drop in left opened the doors for the Pirates first scoring rally. The team played well all week going 7-2 overall and 5-1 in pool play, but the championship game was not their finest hour.

“We just missed a couple of times, hit the ball right at the defense, and I am not sure we came up with the defensive play when we needed,” manager Bernie Ellison, 59, said. “What are you going to do? That’s baseball.” Still, Ellison continued, “it was an amazing week. We had 22 guys pitching in and making it work. We didn’t get the ring but it was an amazing week overall.”

Steve Kelskie and Ron Coan had two hits each, while Eric Colon and Jordan Sayles had two RBIs each for the Yankees, who are still waiting for their first rings.

As it turned out it was the Pirates’ day.

“It was a team effort,” said Carter, who won his fifth ring. “I was fortunate to have a good week, but I didn’t throw a single pitch. We had some great pitching efforts all week long.”

Foster, who won his fourth title, said it was about the guys who were getting fitted for the first time. “It’s nice to see these guys finally get one,” he said. “When you have one you are still hungry, but you always remember what it is like to get the first. It was great seeing the look on their faces.”