Win when it counts most 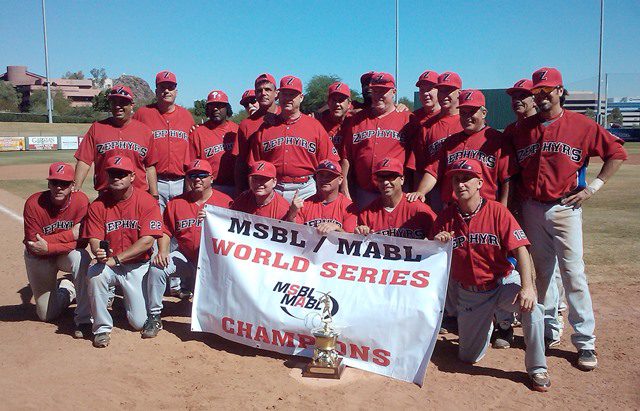 Tempe Diablo Stadium, October 18, 2013 – Second chances don’t always come, so when the South Bay Zephyrs got another crack at the East Haven Jor’els they made it count.

In the 50 and over Cactus Division championship the Zephyrs defeated the Jor’els 8-2 behind a strong pitching performance from starter Kevin Hagan.

“Kevin Hagan only gave up two runs in the seventh inning and other than that it was lights out,” said Zephyrs manager Antone Henley. “He was crisp in the beginning but a little later I was thinking about pulling him and he said, ‘No, I’m finishing this game.’ So my hat is off to him. He’s a great pitcher and a great man.”

In their first meeting during round robin play the Jor’els won 10-9 in a back and forth battle giving the Zephyrs their only loss of the tournament.The Zephyrs went on to defeat the Corona Diamondbacks with a decisive victory in the semifinals putting them in a rematch with the number one seeded Jor’els from Connecticut.

“It was a long journey and I’m glad we finally did it!” exclaimed Henley.”They beat us in pool play and were the number one seed in the tournament but we showed them who was the number one team this year. They played well and I congratulate them.”

Team most valuable player, Bobby Graham, didn’t disappoint either going 2-for-4 and driving in two runs in the leadoff spot for the Zephyrs. He also provided outstanding defense at shortstop all tournament and it was fitting that the championship game ended on a double play that he started.

“He (Graham) has been making great defensive plays all tournament, batted about .550 and was clearly the best defensive player on our team.” said Henley. “It’s a mystery how to get him out and we don’t know how he does it. I’ve played against him and I’m glad he’s now on my team.”

This game really boiled down to the second inning where the Zephyrs were able to take advantage of three Jor’els errors to score six unearned runs. Graham had the big hit in the inning – a two run doubled to center. The Jor’els had opportunities to get back in the game, but they left runners on base in eight of the nine innings.

“We had one bad inning where we gave up six unearned runs and that was the game,” said Jor’els manager Greg Schienda. “It was the only inning that we fell apart in all year. Just one bad inning.”

Jor’els starting pitcher Jim Fritz buckled down after a rough second inning to allow just five hits and two runs over the next six innings. Todd Leveen provided a spark in the seventh inning for the Jor’els when he lined an RBI double to centerfield to trim their deficit to four.

The Zephyrs quickly answered in the top of the eighth when Paul Drake and Rob Medel hit back-to-back doubles driving in two more runs.

“It was a whole team effort,” said Schienda. “Our pitching has been fantastic and it’s been everything you’d want.”