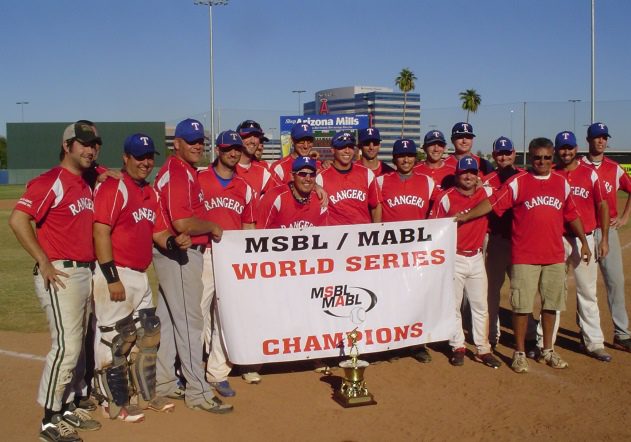 Tempe Diablo Stadium, October 20, 2013- One is country, the other rock ‘n roll. Put them together and you can call them champions. “It just goes to show that Yankees and Southerners can work together,” explained Rangers co-manager Joe Holehan after Tulsa beat Bigfoot Baseball to win the 2013 25+ Central World Series.

Holehan manages a group of players from Tulsa, Okla. Larry Kolcz leads a squad from Chicago, Ill. The two joined forces last year to put together a tournament team that jelled to take home championship rings in 2013.

The Rangers fell behind early as Bigfoot tallied single runs in the second and third innings. A sacrifice fly by Brock Robinson and an RBI single by Jonny Arana put Bigfoot ahead. Tulsa used two Bigfoot errors, three hits, a walk and a sacrifice fly to score three times in the bottom half of the third and take the lead for good. Another error sandwiched around two walks and a hit put two more runs on the board for the Rangers in the fourth. “Those two errors in the third really put us in a hole,” said Bigfoot manager Joe Brotherton. “We hurt ourselves on defense and just couldn’t overcome the mistakes.” Kolcz agreed that the third inning was the turning point. “We used a couple of their errors to get us going and Jason (Bunton) was terrific on the mound,” explained the Rangers co-manager. Bunton scattered eight hits, walked one and struck out four to earn the win.

Larry Fournier was selected as the tournament MVP. “He was always on base and getting us started,” said Kolcz. “Not only that, he tracked everything down in centerfield. He got to balls no one else could have.”

Bigfoot Baseball is a melting pot of sorts with players from Los Angeles, Denver, Sacramento, Arizona and Oregon. “I move around a lot,” explained Brotherton. “Everywhere I go, I play in a league and have picked up players that we bring together for this tournament team.” The loss was a bitter pill to swallow for Bigfoot. It was their first championship game after previously losing in the semifinal or quarterfinals four times. “We wanted this one, so it hurts,” said Brotherton. “But we’ll be back next year.”

Bigfoot advanced to the final the hard way. After going 3-2 in pool play, they were forced to win three times in the playoffs. Rising to the occasion, they beat the Yarddogs 12-1; Arizona Smoke 8-7; and South Mountain Twins 6-1.

Tulsa finished pool play with a 4-1 mark and earned a first round bye. In the playoffs the Rangers beat The Rock 4-1, and the Las Vegas Dirtbags 5-4. “The bye was huge,” glowed Kolcz. “By not having to play that extra game it allowed us to set up our pitching the way we wanted it. It was just perfect.”

What may have seemed to be an odd couple turned out to be a perfect pairing indeed. Now the managers and teammates from very different parts of the country can celebrate their union with rings—championship rings.