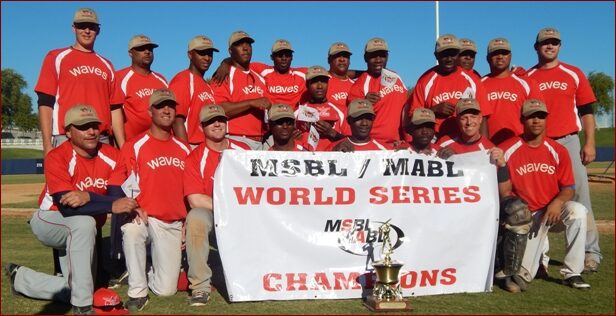 This day belonged to the young men from the Virgin Island with a little bit of the credit going to a guy from Michigan – Aaron Wick.

The St. Thomas Waves defeated the California based AJW White Sox 9-2 in the championship game of the 25+ Wood Bat American division thanks to Wicks’ complete game performance and the power of DeShawn Brooks.

The Waves put three runs on the board in the top of the first inning. Two of those came when Brooks blasted a pitch nearly 400-foot blast over the 375 foot sign in left center. That turned out to be all of the runs the Waves would need, but not all they would score. They added four more in the third to put the game on ice.

Wick, the tournament MVP, was masterful in shutting down the powerful White Sox – a team that entered the game at 7-0 counting a 5-4 semifinal win over the Long Island Sun Devils. St. Thomas came into the game at 6-1.

The Wave’s speedy Leon Martin was on base three times from the number two position in the order and scored twice while Wick helped himself with two RBI in the pivotal, four-run third inning.

“I was a little sore today after closing out the game yesterday,” Wick said. “But after the third inning I got loose and everything started working for me. I felt pretty good out there. The White Sox are a really good hitting team and have great approaches. Our defense really kept us in it. I was trying to keep the ball in play for them.”

The White Sox got some stellar relief pitching after the wheels fell off in the third inning, but it was unfortunately too little too late. Steve Hueston threw five beautiful innings in relief of starter Tom Canele and was followed by Nick Alexander and Brian Hobbs in the eighth and ninth innings. The trio of pitchers combined to give up only two additional runs in the eighth inning to the Waves. John Constantino led the White Sox in hitting, as the lead off hitter was one for two with a walk and scored in the bottom of the first.

DeShawn Brooks added a sacrifice fly to his highlight reel in the eighth inning for the Waves and ended the day with four RBI. Kyle Lamotta chipped in a two for four day and lead off hitter Akeem Francis was on base three times with a single and two walks. The combination of Virgin Island bats and Michigan pitching was just a little better on this day. The White Sox, gracious in defeat, hinted that they would return to fight again. “We had been hitting the ball well all week and had six pitchers ready to go today,” said Marlen Foster of the White Sox. “But this is baseball and they got the best of us today. They are a great bunch of guys. Maybe next year.”