(Originally published online in 2012) The pressure of taking over as President of the Sacramento MSBL isn’t unlike the pressure facing a relief pitcher that has been called upon to come into a game and protect a big lead. The mission is clear: “Don’t screw it up.” After three years at the helm for the Sacramento MSBL Jim Tygrett-DeNuzzi can confidently look back and say “mission accomplished.”

Sacramento is a model MSBL league. It was formed by some baseball-hungry 40-somethings in 1984 – two years prior to the creation of the National MSBL and joined the National MSBL in 1988. In the intervening 27 years five men, including Jim, served full terms as presidents and they transformed it from a fledgling, four-team league into a model of ambition and success with 550 players, its own lighted field complex, a hall of fame, and 45 MSBL World Series titles – believed to be the most by any MSBL league.

Jim, who has also served as a league commissioner, secretary, treasurer and vice president of the league, took over in 2009 and not only did he not screw it up, he saved it quite a bit of money. The league was not, as it previously thought, operating as a 501c3 not for profit organization – something it realized only after some investigative work by Jim. “We thought we were, but we weren’t,”.

Jim got the phone book out, found an attorney who would do some pro-bono work for the league, and in October 2010 the league started a sort of bureaucratic do-over. “We had to reapply for nonprofit status,” “We had to revise some bylaws. It took until July 2011 to finish the job. The league is actually a 501 c4 organization now. It puts a stamp on us as an organization,” he said. “We’re more than just a local baseball league. We’re a social organization.” Jim’s work also saved the league from potential IRS penalties. “We got it all straightened out,” he said. “It was a matter of tying up a few loose ends.”

Under Jim the league was able to pay off the loan for the lights at its McAuliffe Field complex. It added LED 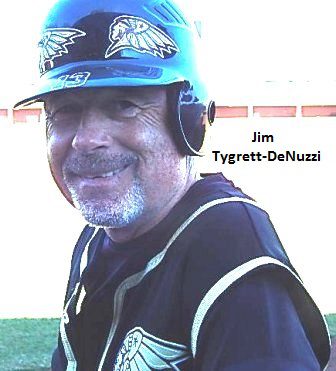 lights in the parking lot there too. Jim is proud of the league, citing the league’s colossal trophy case from the MSBL World Series. “You want to maintain that level of how people think about you and what it’s like to play in the Sacramento League.”

Jim is a long way from where he started. He was born on Staten Island NY, grew up in New Jersey worshipping Yankee third baseman Clete Boyer. He would often take the train, bus and subway to Yankee Stadium. He also saw games at the Polo Grounds and at Connie Mack Stadium. After High School, Jim played baseball at Missouri Valley College. He moved to California in 1978 and recently retired as the jail’s program services coordinator in Placer County’s alternative sentencing program.

In 2011 Jim was given membership in the Sacramento MSBL Hall of Fame. He is quick to praise the 10-member board whose members handle various duties from pictures to advertising and marketing. “We owe a lot to the current group but we also owe a lot to the founders of our league for what they established here. There is a responsibility you have to take on,” he said. “Every President has made an improvement.”