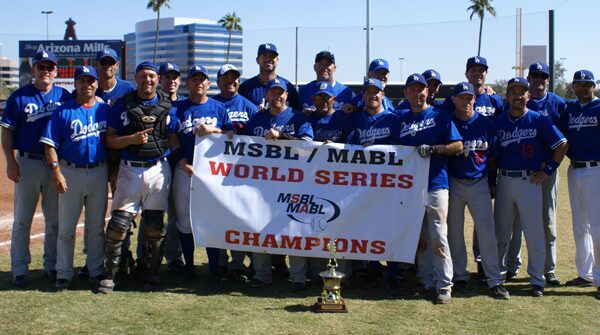 Tempe Diablo Stadium, Oct. 22, 2011 — If Brad Milner learned anything in his 15 years of coming to Arizona for the MSBL World Series, it is that every half inning counts.

The Ventura Dodgers showed that type of focus all tournament long in earning Milner his first ring after all of these years with a 12-0 win over the Murrieta Mutiny of California in the 35 Wood Cactus Division.

“I haven’t been measured for a ring in 20 years,” Milner said, pointing to his wedding band. “I can’t wait to find out what it is.”

The Dodgers went 8-0-1 beating the South Bay Zephyrs and Calzona Angels in the playoffs before handling the Mutiny.

The winning every half-inning approach really surfaced in the semifinals when they beat the Angels 3-2 with the winning run coming in the bottom of the eighth when Dale Woodard came up with the big hit.

“We came close a couple of times with a some playoff bids and lost (in the title game) in 2008,” Milner said. “Every half inning counts. We had one bad half inning (in ’08) the whole tournament and it cost us. I told the guys we have to have production every half inning or we are going to succumb to it again.”

There were no such worries in this year’s championship game as the offense scored in multiple innings and right-handed starter Jason Schmidt threw a complete-game shutout while striking out seven with no walks.

“My nerves,” Schmidt said when asked what worked for him on the mound. “I didn’t want to get this close again and come up short. It was just fastball and curveball and phenomenal defense.”

Schmidt was also the hitting star of the title game as his two-run single in the third ignited a five-run rally as he finished 2 for 3 with two runs, a stolen base and three RBIs.

“I was just trying to stay on the ball,” he said on the third inning knock. “It was a big inning that got us going in the right direction.”

The Mutiny made the playoffs for the first time in three years in coming to Arizona thanks in large part to two Ironmen as pitcher Mike Shafor pitched a total of 48 innings in the tournament, including the final six in the championship game, while catcher David Rodriguez logged nearly every inning.

“He has a rubber arm,” Mutiny manager Tony Zaia said of Shafor. “He is our MVP and we never would have made it this far without him.”

The team, which played out of the North County MSBL, went 7-2 over the weekend but ran out of steam.

“We had a great tournament, but probably played our worse game in the last one, most important one,” Zaia said. “We made the playoffs for the first time and played for the title. We’ll take that back with us and try to get a little better next year.”

That had been Milner’s mantra for about the last 14 years until coming away with that first World Series ring for the Dodgers.

“If any one deserves a ring it is (Milner),” said third baseman Jason Warren, who missed the two playoff games because of a family emergency but flew back for the title game. “He led us here and set tone by keeping us focused the entire time.”