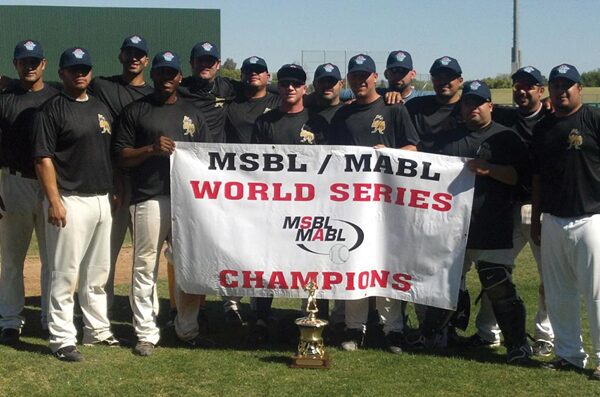 Hohokam Stadium, October 23, 2011— Funny how recreational baseball works. Each player has a past, a quest for the dream, and that’s how they end up here, not quite ready to let go of a game they grew up loving, even if it didn’t always love them back.

Occasionally that journey comes full circle, past meets present, and all a player can do is laugh and think: What a crazy game. What a crazy life.

On a sunny fall day in the desert, this was what went through Michael Kesten’s mind as he prepared to warmup in the outfield grass of Hohokam Stadium. Kesten, who spent eight years in baseball’s minor leagues, was the SoCal Buzz’s starting pitcher in the finals of the 25 Wood Bat National division World Series.

For the first time, Kesten noticed his opposition. There, warming up not far away for the Dallas Modocs was Charlie Griffin, his old Independent League roommate.

“Baseball is a small world,” Kesten said after he pitched nine innings, leading the Buzz to a 3-1 win over Griffin and the Modocs.

Kesten and Griffin played for a season in Amarillo, Texas. Since then, they had gone their separate ways. Today, Kesten, 30, is a deejay at a strip club in Wilmington, Calif., while Griffin, 32, owns a baseball academy in Dallas.

In Texas, they were teammates. Here, they were a contrast in styles. While Kersten worked quietly and efficiently, addressing the home-plate umpire as “sir,” Griffin produced an R-rated commentary throughout the contest.

He directed his venom at everybody, but mostly himself, trying to push himself through a tired arm – “I haven’t pitched on three days’ rest in six years” he said – and lift his team to victory.

“I spend most of the game trying to settle him down,” Modocs manager Steve Hahn said.

Kesten was better this day, but not by much. He went nine innings, scattering seven hits, and had the Modocs muttering most of the way.

“Man, that was a good pitch,” outfielder Tommy Weisz said after watching a breaking pitch go by for Strike 3 in the first.

“He’s got a good changeup,” outfielder Jerry Anderson said walking back to the dugout after fanning in the second.

Marcelino Escalante’s run-scoring ground out in the fourth gave SoCal a 1-0 lead. After Dallas tied the score, the Buzz took the lead for good in the sixth on Sergio Alvarado’s run-scoring single. They added an insurance run in the eighth.

Dallas’ missed opportunity: Running into two outs on the base paths in the fifth, ruining a chance for a big inning.

“We couldn’t get our offense going, and once we did, we had two bang-bang plays that didn’t go our way,” Hahn said.

Dallas, the fourth seed, went 3-3 in the round-robin tournament. Anderson tossed a complete game to get the Buzz into the finals. Griffin tried to take over from there, but fell just short. He went seven innings, allowing eight hits and two runs.

The Buzz lost just once in the tournament, to a team from San Diego.

“Pitching and defense,” manager Anthony Bautista said. “That’s what got us through.”