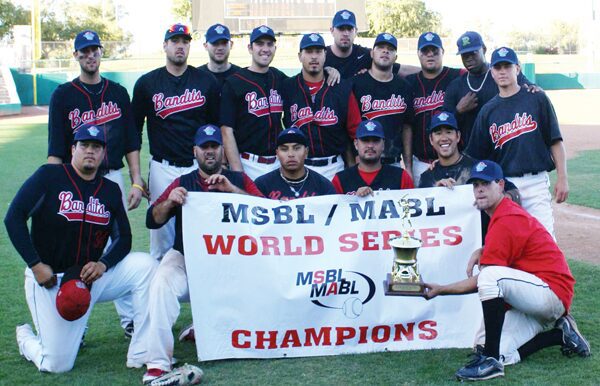 Hohokam Stadium, Oct. 23, 2011–The Westside Bandits started running in the second inning – and they never stopped.

“They ran on our pitchers all day,” Dirtbags manager Kris Barber said. “And our catcher was tired and fat.”

Barber was the catcher — and he looked tired.

“We’ve been playing for four years,” said Morey, a Bandits co-manager. “We’ve had bad experiences with bad teams, bad chemistry. It’s fun to win with guys you like.”

The Bandits removed doubt early, chipping away at Las Vegas every inning. They scored in every inning but the seventh, running up a 10-2 lead before the Dirtbags finally made it mildly interesting with a four-run outburst in the eighth.

“We were a little pooped,” Barber said.

In the ninth, the Dirtbags took their frustration out on the home-plate umpire, who ejected two players – one was ordered out of the stadium – and nearly tossed a third. “Are we still doing this?” the umpire yelled after another insult came from the Las Vegas dugout.

Ryan Develyn went eight innings to secure the win for the Bandits. It seemed like he was in trouble every inning, but he always found a way to escape, pumping his fist as he jogged off the field.

Develyn gave up six runs on 13 hits. He struck out six and walked one.

Hugo Hernandez provided plenty of offense including a solo home run and a two-run single in his first two at bats. “He’s been a monster for us these last couple games,” Morey said.

Morey and Eddie Murray, the first two hitters in the order, were on base a combined seven times, setting the table for Hernandez and Guillermo Zavala, who drove in two.

Co-manager Rob Luna, the man signaling double steals and sacrifice bunts from his spot in the third-base coaches’ box, also drove in two, helping the Bandits finish a successful week: Just one loss in six games.

“We had great pitching, great defense and the hitting came around,” Luna said.

For the Dirtbags, Gator Quaney – what a great baseball name — had two hits and drove in two. Jim Stolberg doubled twice and Chris Bannister had two hits. But Las Vegas never could slow down Westside enough to mount a rally, not at the plate or on the base paths.

“Our pitching and defense helped us going into this game,” said Barber, whose team was undefeated in round-robin play. “We just couldn’t get it going.”