By Jason Skoda, special to MSBL 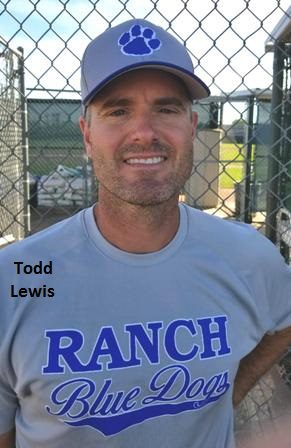 October 28, 2018, Mesa, AZ…There was nowhere else the ball to be hit. It had to be to third base. Right into Dad’s waiting glove. No one else was going to register the assist on the final out. Not in this game. For this family. On this occasion.

Todd Lewis, with his team up by a run and the tying running heading to third base, fell to his knees while fielding the groundball, gathered himself and threw to first base to preserve the 2018 MSBL World Series Father/Son Zona Division Championship for the Ranch Blue Dogs.

The Ranch Blue Dogs beat the Utah Utes 10-9 on Sunday to give the newly formed team, one dedicated and created for Scottie Lewis, a seemingly predestined title.

“I was talking to him the whole (ninth inning),” said Todd, who has a picture of his son Scottie inside his hat, who died in a tragic accident two and ½ years ago. “I kept telling him to bring this one home for us, and I know that’s why the ball was hit to me. It was him giving us a chance to win this whole thing. It was just like a movie.”

The team was formed and named for Scottie, who was handicapped and dealt with seizures before his accidental 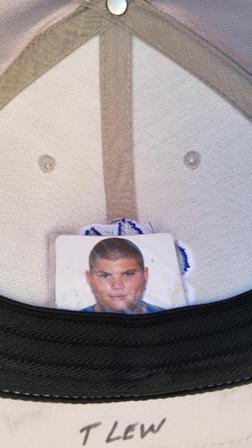 death. The team’s name is based on the fact that that Scottie loved ranch and the kids’ TV show Blue Clues. “I was always planning on getting him an at-bat in this game someday, and this is the first year he would have been eligible,” Lewis said of Scottie, who loved sports and even had a hole-in one on his dad’s home course in California. “He wasn’t here but he was our MVP. He got us through this and everyone is here for him.”

Scottie, who is remembered as “perfectly original”, may not be in the present but his presence was surely felt throughout the week that saw the Dogs go 5-1.

The Dogs are based out of the Sacramento area, but truth is they are spread out all over the west coast. Most of the team is a direct relative by blood or marriage to Scottie including seven members between his grandfather, uncles, father and brothers.

“We are all here for him and that is what this (Father/Son) division is all about,” said manager Val Lewis, Scottie’s grandfather. “He was supposed to play in this game; unfortunately, that will never happen, but everyone here knows what it means to be touched by him.” The game itself wasn’t a thing of beauty but certainly had a “perfect original” feel to it. 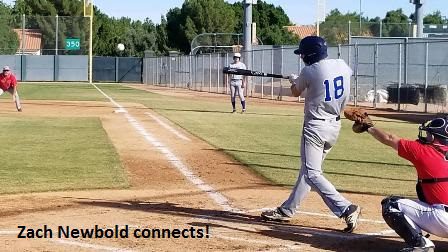 The Dogs build leads of 2-1 and 7-1 after three innings thanks to the bats of Todd Lewis, Zach Newbold and Josh Bell, who all had an RBI single in the second.

It almost wasn’t enough thanks to a resilient Utah squad that lost in the Zona finals by one run for the second-year in a row. The Utes, who went 4-2 on the week, came back to tie it in the fourth with a six-run rally led by Duane Lee’s three-run double and Austin Lee’s RBI single.

“That’s two years in a row we lost a tough one in the finals,” said Utes manager Randy Miles, who had two hits 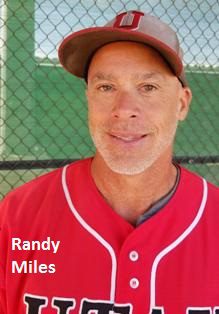 and two runs. “It’s about playing everyone and having fun but getting this close and coming up short hurts a little bit.” Miles had three family members play in the game including his daughter Sydney, who is one of at least two daughters to play this week. “She’s our spark plug, and she holds her own,” Randy said. “I love having everyone out here.”

The Dogs took the lead for good on Bell’s bases-loaded, three-run double for a 10-7 lead and won it with Newbold, a left-hander who came on in relief and threw four and 2/3 quality innings, on the mound. “There was some pressure there, knowing everyone wanted to win for Scottie,” Newbold said. “We got a couple of quick outs (in the ninth) and I was able to settle in and get the final out. It’s pretty special. Our families go way back, and everyone loved Scottie.” 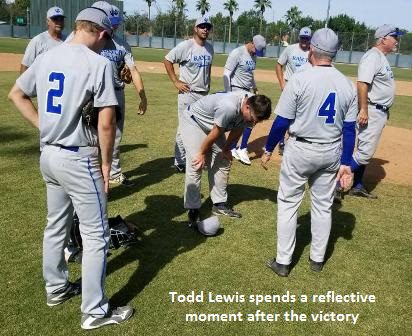 That was clear soon after his father corralled a ball hit directly to him with the game on the line. After he fired to first there was a huge celebration in the center of the diamond until Todd peeled off, broke down and had a few moments for him and Scottie. “I have no doubt he was here and had a hand in this,” he said. “I’d give anything to have one more moment with him, but this was probably about as close as I am going to get.”